There’s a good reason for that:

Visual marketing is super effective for getting backlinks, social shares and traffic.

There’s data to back this up: an industry study by our team and BuzzSumo discovered that infographics work really well for building links.

A visual version of a concept, strategy or idea.

Concepts are hard to explain… but easy to visualize.

And when someone wants to explain that concept on their site, they may use your visual.

A while back I wanted to describe “The APP Formula”.

The APP Formula is a strategy that helps you write compelling blog post introductions.

But instead of just explaining it, I created a visual version of the concept.

Sure enough, whenever someone talks about The APP Formula on my site, they link back to me:

(This is just one example. This simple visual has netted me AT LEAST 20 backlinks.)

Video that’s created specifically for one social network, like:

And when you post something that takes people AWAY from the platform, your post is gonna get buried.

But if you can keep people on that network, you’re golden.

And native video is the best way to do that.

In fact, BuzzSumo discovered that native videos CRUSH other types of Facebook posts.

Some time ago I uploaded a short video on LinkedIn:

I just grabbed a clip that would work well on LinkedIn…

…and uploaded it as a native video.

That’s the power of native video.

A complete guide to a topic on a single page.

Guides give people “one-stop shopping” for information on a given topic.

But for an ultimate guide to work, you need to use a custom-designed page.

A custom-designed page tells people: “This guide is legit!”.

A while back I published this guide to link building.

As you can see, it’s NOT a typical blog post.

It’s got lots of useful content… and a design that helps it stand out:

To date, this single piece of content has been linked to 5.79k times.

Guest posting on with an infographic… instead of a traditional guest post.

Getting your post published on an authority site can be TOUGH.

(Especially when you’re first starting out.)

But when you offer an infographic as your guest post, you’re giving the site owner an offer they can’t refuse.

When I first started my blog, I wanted to get published on one of the world’s most popular digital marketing blogs: HubSpot.

I was a nobody with a tiny blog that nobody read.

That’s when I decided:

“Instead of a traditional article, I’ll pitch them an infographic.”

My infographic guest post was published that same week: 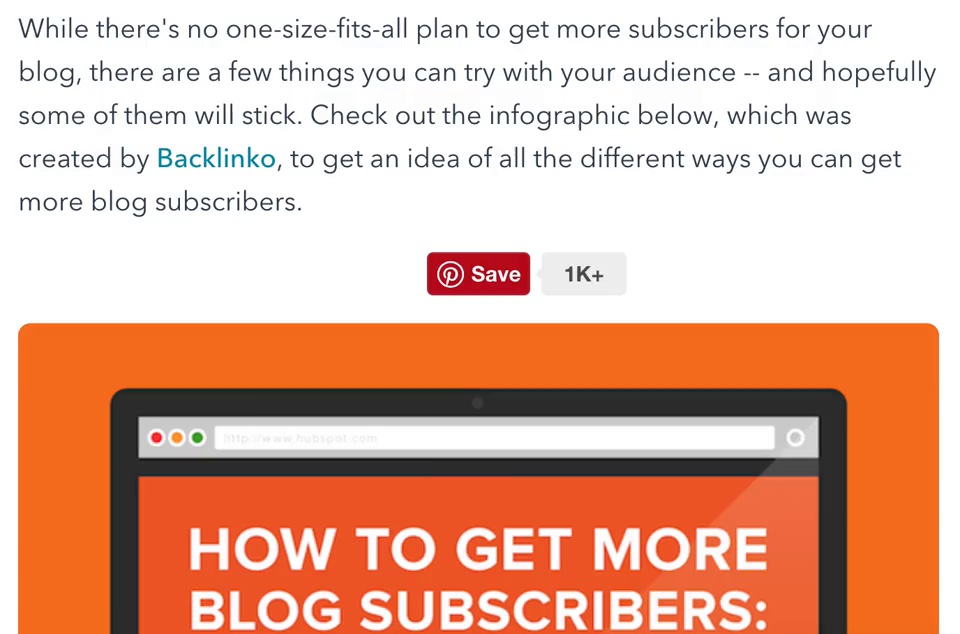 A visual form of data… like a chart or a graph.

Raw numbers are REALLY hard to understand. But the right visual can make you say: “I totally get it now”.

Plus, despite the fancy name, visualizing data doesn’t have to be hard or expensive.

In 2019. I have published an email marketing guide.

But instead of just citing stats, I decided to visualize them:

(As you can see, these charts are NOT fancy. You can probably create something similar in Photoshop.)

Video is PERFECT for explaining certain concepts, strategies or techniques (that’s one reason that video is a super popular marketing strategy right now).

I use Embedded Blog Post Videos in lots of my posts.

Like this one where I use a video to describe a strategy: 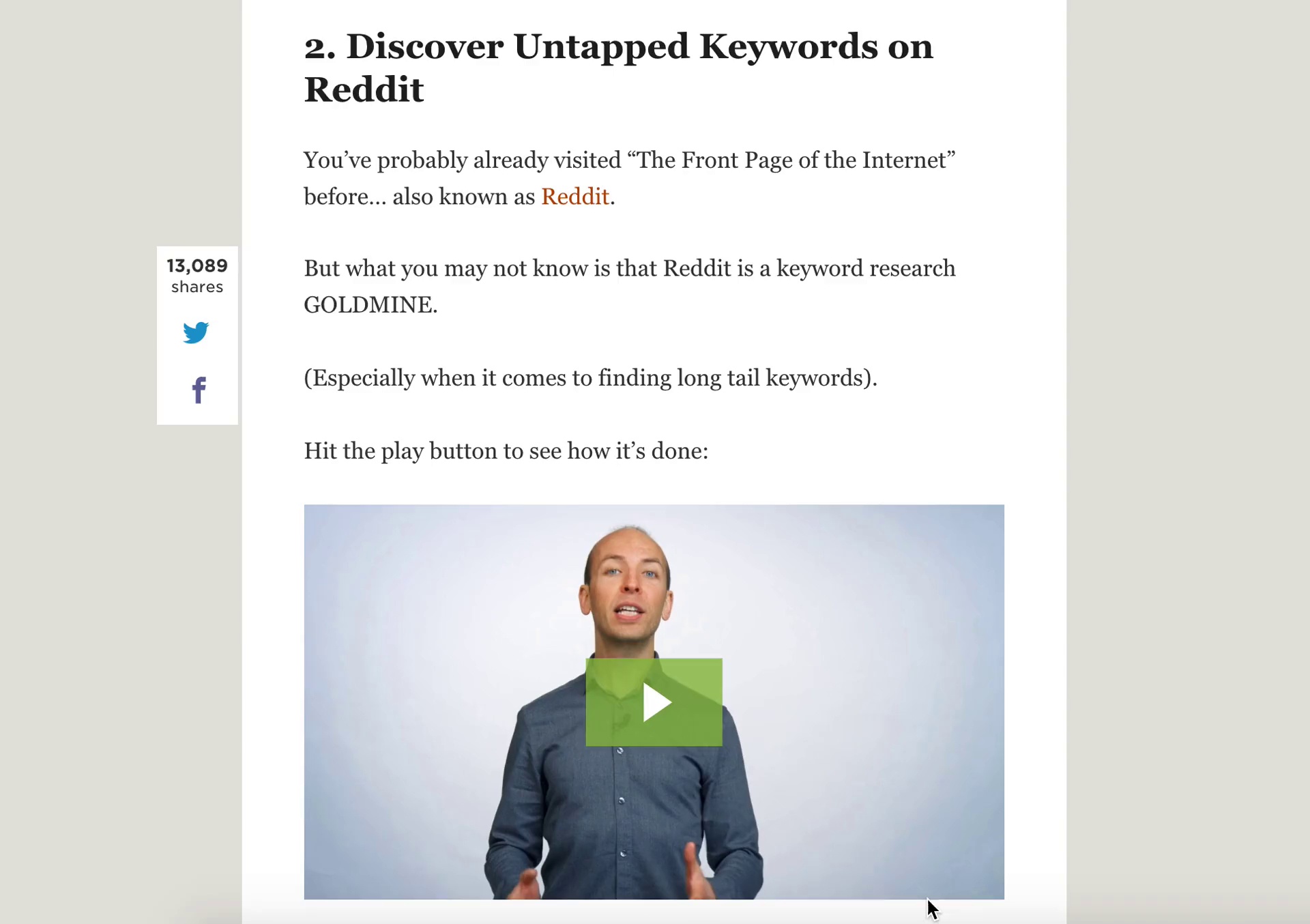 Over the last few years I’ve been able to grow my YouTube channel from scratch to over 440k subscribers:

To date, my videos have been viewed over 12 million times:

A way to visualize a process.

A flowchart makes understanding “if X then Y” concepts a cinch.

(For example, “If your computer is frozen, restart. If that doesn’t work, run a virus scanner”.)

Some time ago I wrote a post about Google’s AI algorithm: RankBrain.

And I wanted to explain how RankBrain measures the way people interact with the search results.

How could I visualize how this process worked?

Then it hit me: a flowchart.

So I whipped up this simple flowchart visual.

And this visual helped make the process easy for non-techies (like me) to understand.

Your flowcharts don’t have to be simple. In fact, a big ol’ flowchart can give your content that “wow!” factor that pushes people to share.

For example, here’s a giant step-by-step flowchart I created a few years back: 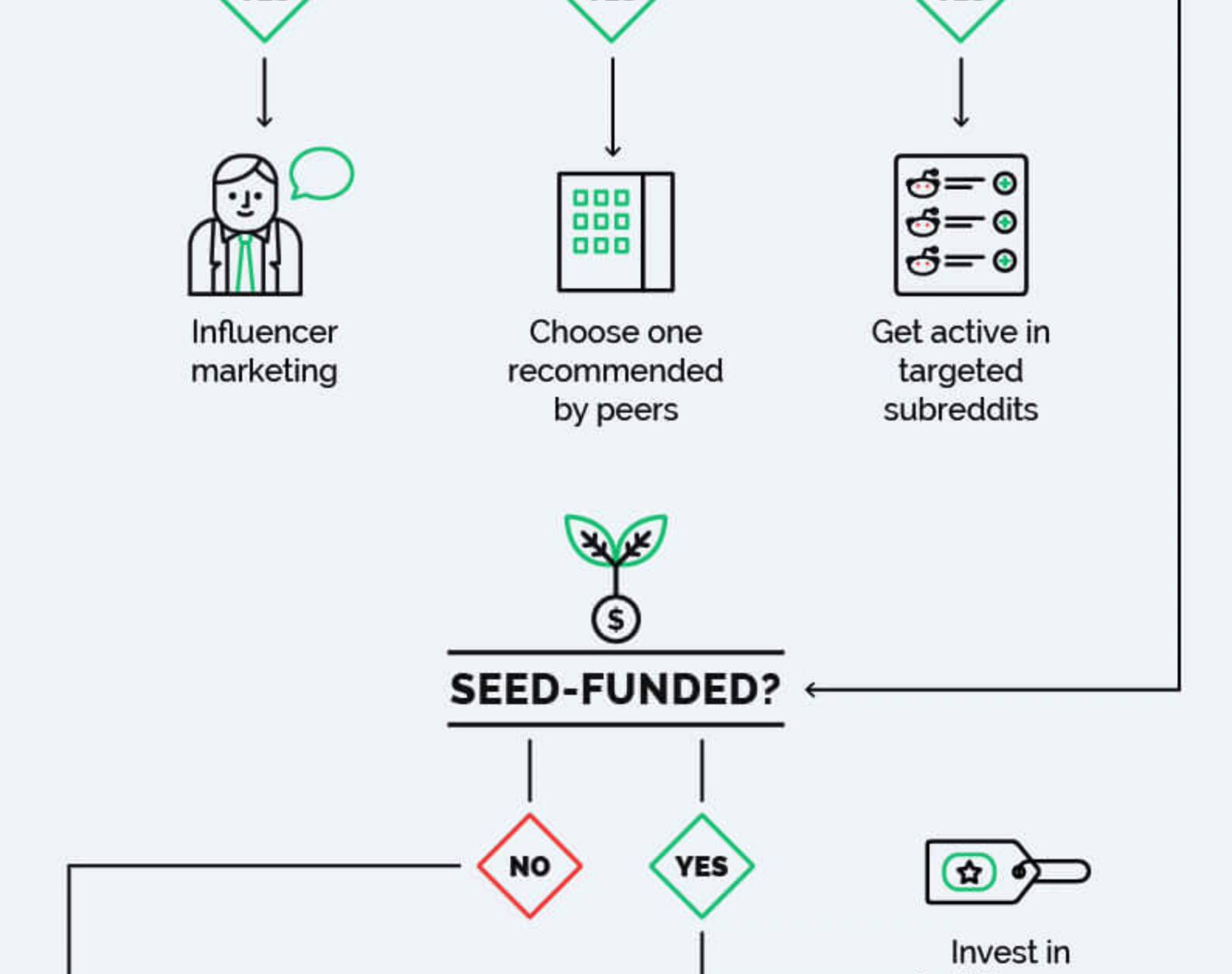 An infographic that teaches someone a new strategy or approach.

Most infographics are the same old stuff: pie charts and graphs.

But infographics aren’t for visualizing data.

This on-page SEO infographic is one of the most successful pieces of content that I’ve ever published. 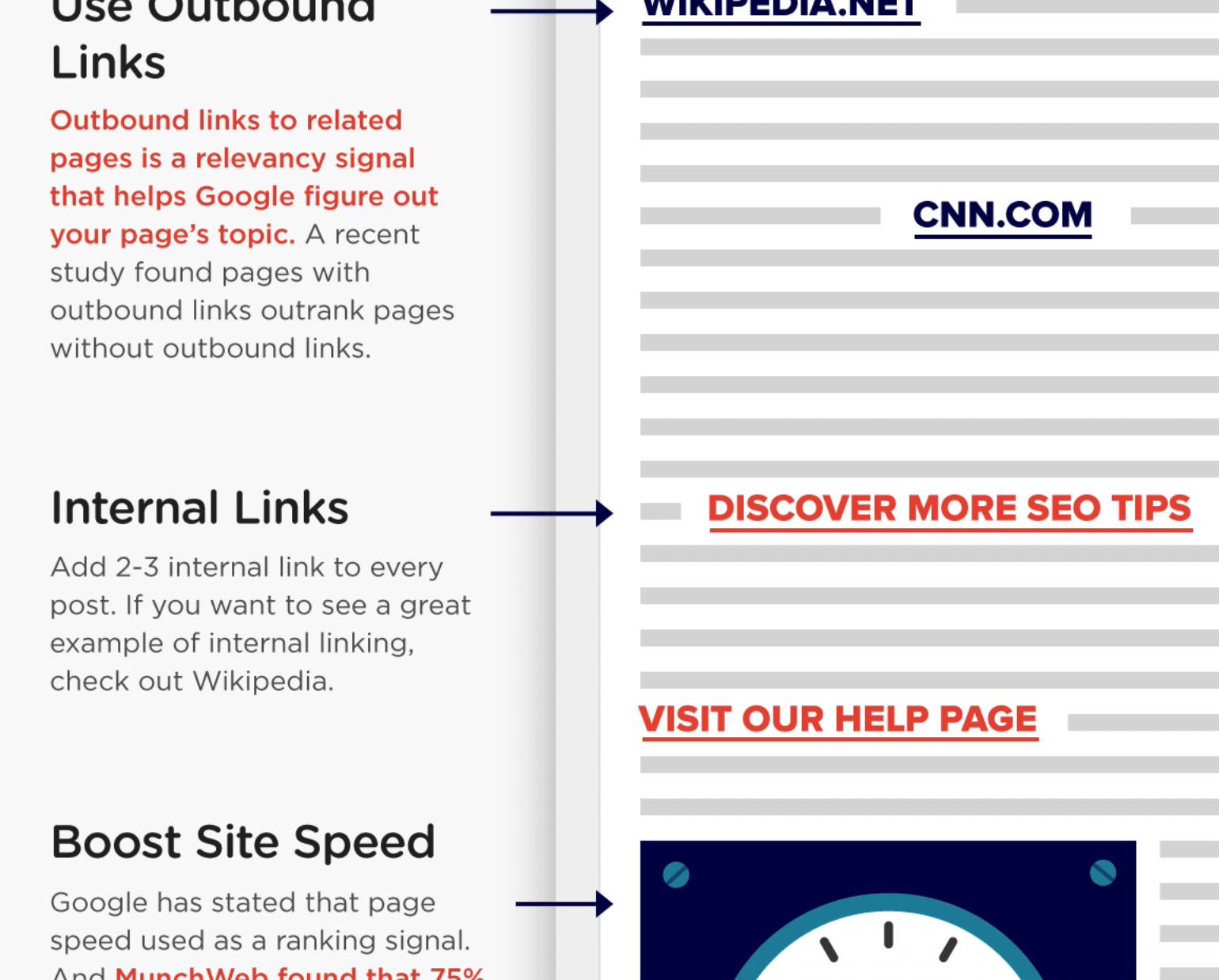 This infographic has resulted in 825 comments:

But showing people the same thing with screenshots? That’s a different story.

I use lots of screenshots at Backlinko.

Screenshots to outline a process:

To visualize something I just explained:

Or to show people “behind the scenes” data:

If you want to get fancy, try using an animated GIF instead of a static screenshot: 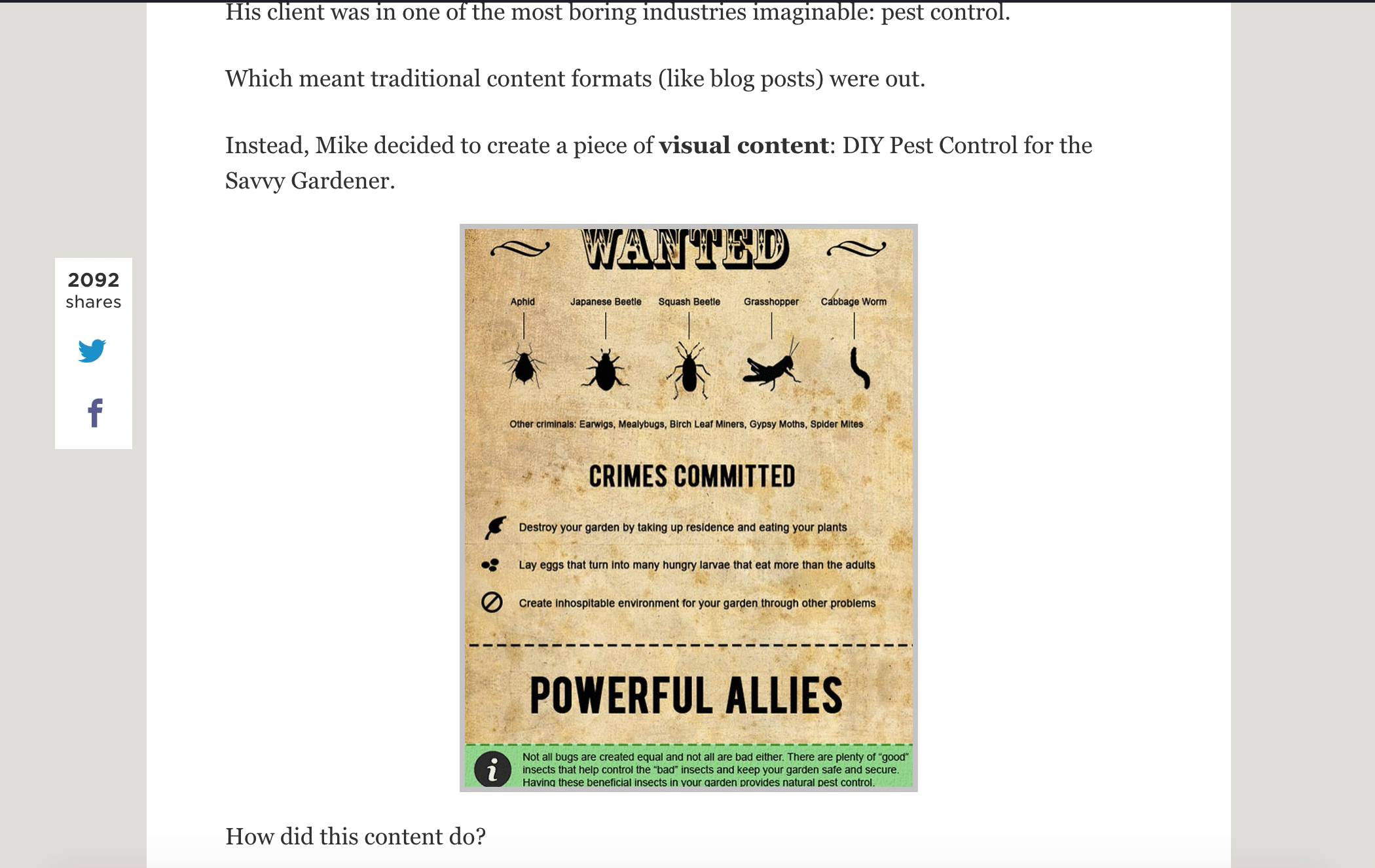 It looks cool and helps show people exactly what to do.

I use GreenShot and TechSmith Capture to capture screenshots. But other people swear by Skitch.

Feel free to use whatever tool works best for you.

A set of presentation slides designed specifically for SlideShare.

SlideShare is one of the world’s top 250 most-visited websites.

Despite being super popular, it doesn’t have a ton of competition for eyeballs. In fact, I’d consider SlideShare one of the biggest untapped content marketing strategies right now.

Gary Vee published this relatively simple deck to SlideShare some time ago:

Because the content was super valuable, his Slideshare presentation generated over 300k views in 2 weeks.

Content that moves or changes based on how you interact with it.

A few years back the New York Times released: “Snow Fall: The Avalanche at Tunnel Creek”.

It not only tells a compelling story…

…but moves and changes as you scroll down the page.

You can also use interactive content on landing pages to make them more compelling.

Content curation is an awesome way to publish valuable content… without needing to create anything new. And when you make your curation visual? It increases the perceived value 10 fold.

A LOT of people have recommended books on Tim Ferriss’s popular podcast.

To find these books you had to listen to every single episode.

That is, until one fan created fourhourbook.club.

It’s a visual list of every book mentioned on the podcast.

Because this list provided so much value (and looked cool), it CRUSHED on social media platforms…like Product Hunt:

(Which sent thousands of visits to the site overnight.)

An infographic that you create with another person or brand.

You get a nice visual asset at half the cost (assuming you split the design costs with your partner). And because you’re doubling down on promotion, your infographic has a higher chance of going viral.

A few years back I teamed up with Larry Kim to create this high quality infographic: 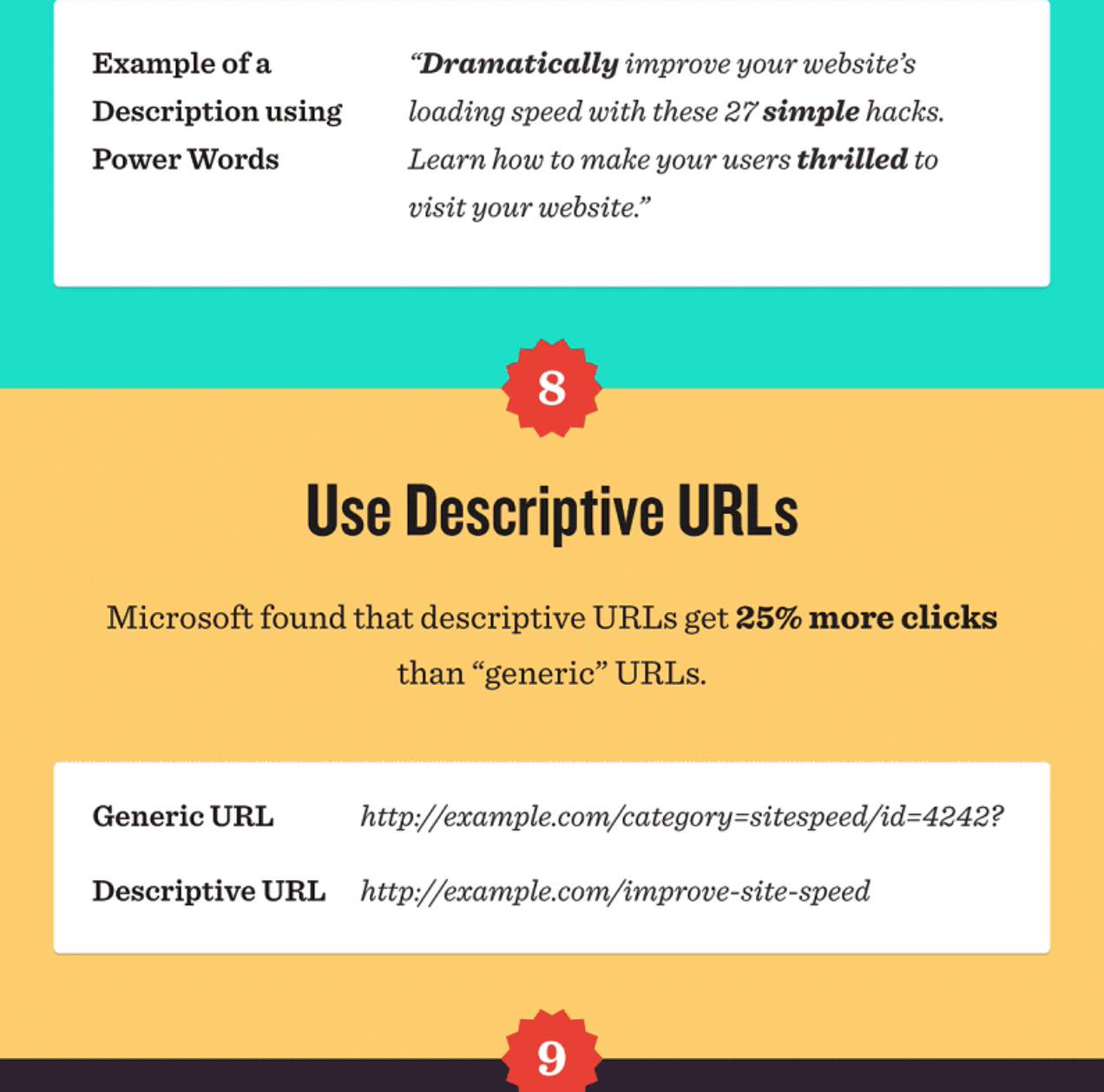 We worked together on the content (which made the process 2x faster). And we split the costs 50/50.

Because the infographic was a joint effort, we co-branded it:

But here’s where things get interesting…

Because we both promoted the infographic, we doubled the number of eyeballs that saw it.

In fact, the infographic did so well that it was the #2 most popular SEO-related post on Search Engine Land that year:

A way to explain an idea or concept in comic strip form… usually in a humorous way.

VERY few content marketers use cartoons. So it’s an easy way for your online marketing to stand out.

Well, you may already know about The Oatmeal.

But you may not know that you can use comic strips inside of text-based content as a fun and effective way to explain something.

For example, here’s a comic I embedded in a post.

As you can see, this comic explains how Google tests and rolls out changes to their algorithm:

I could have just written out the same exact information.

But it wouldn’t have worked nearly as well.

In fact, my little comic strip got shared on marketing websites around the world:

Data presented as a map. The map can be of a country, a state, the world… it doesn’t really matter.

News sites and blogs LOVE maps. Maps tend to get a lot of social shares and traffic… so news outlets don’t mind sharing and embedding them on their site.

And if you can make a map on a newsworthy topic — bingo! — you’ve got yourself a mention from an authority site.

There are literally hundreds of examples that I could point to.

(Maps are crushing it right now.)

But to give you an idea of how well a map can do, let’s take a look at this map: “Your State’s Favorite Reality TV Show”.

As you can see, nothing fancy.

In fact, I’d wager to guess that this map cost MUCH less than your average infographic.

Despite being simple, that map generated backlinks from 20 different sites:

Including a few links from authority B2C pop culture sites, like Cosmo.

How about one more example?

This map outlines how the US uses its land. 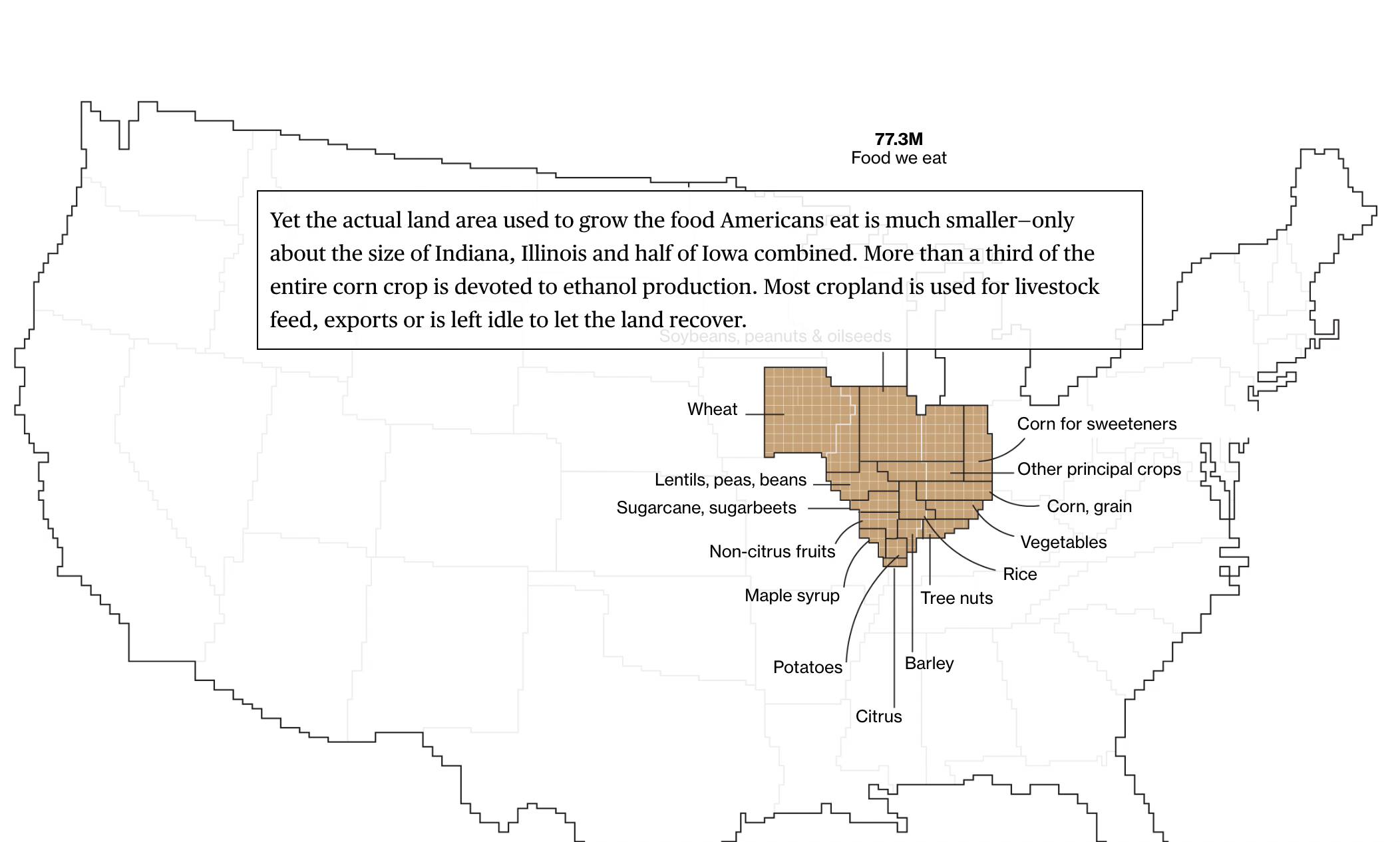 How did Bloomberg make this map?

They took data that was lying around (from the US Dept of Agriculture). And made it into a map.

(There are probably similar opportunities in your industry.)

And this map got linked to 20k+ times in less than 2 weeks!

A big banner that goes at the very top of a blog post.

Especially if you compare them to what people use on their posts: lame stock photos.

Plus, they’re really easy to make (if you have graphic designs skills you can make a blog post banner using Adobe Illustrator or Canva).

Few years ago, I reviewed and rated 25 of the best free SEO tools on the market.

And to make my content stand out, I created a banner to go at the top of the page.

Can You Still Use Infographics to Build Links?: An in-depth look into how well infographics work today.

Repurposing Content: There’s no need to create every piece of visual content from square one. This guide will show you how to turn existing articles, interviews and presentations into visual content.