Specifically, we looked at the correlation between ranking factors — like views, comments and shares — with YouTube rankings.

We learned a lot about YouTube SEO. And I’m sure you will too.

Here is a Summary of What We Discovered:

1. Comments appear to be an influential ranking factor. We found that a video’s comment count strongly correlates with higher rankings.

3. We discovered that video views have a significant correlation with rankings.

4. The number of shares a video generates is strongly tied to first page YouTube rankings.

5. There’s a moderate correlation between a channel’s subscriber size and rankings. This means that even small channels have a chance to rank their videos in YouTube.

7. “Subscriptions driven” has reasonably strong correlation with rankings. Therefore, videos that result in new subscribers have an advantage in YouTube search.

8. We found a very small relationship between keyword-rich video tags and rankings. This could represent the fact that YouTube can now understand video content without the help of metadata.

9. Videos that contain an exact match keyword in their video title appear to have a slight edge over videos that don’t. This means that including a keyword in your title may improve your rankings by a slim margin.

10. We found zero correlation between keyword-optimized video descriptions and rankings.

11. HD videos dominate YouTube’s search results. 68.2% of videos on the first page of YouTube are in HD.

I have detailed data and information of our findings below.

Video Comments Have a Very Strong Correlation With Rankings

YouTube encourages creators to publish videos that maximize engagement. Needless to say, comments are a strong indicator that people are engaging with your video.

But does YouTube use comments as a ranking signal?

Our data suggests that they do: 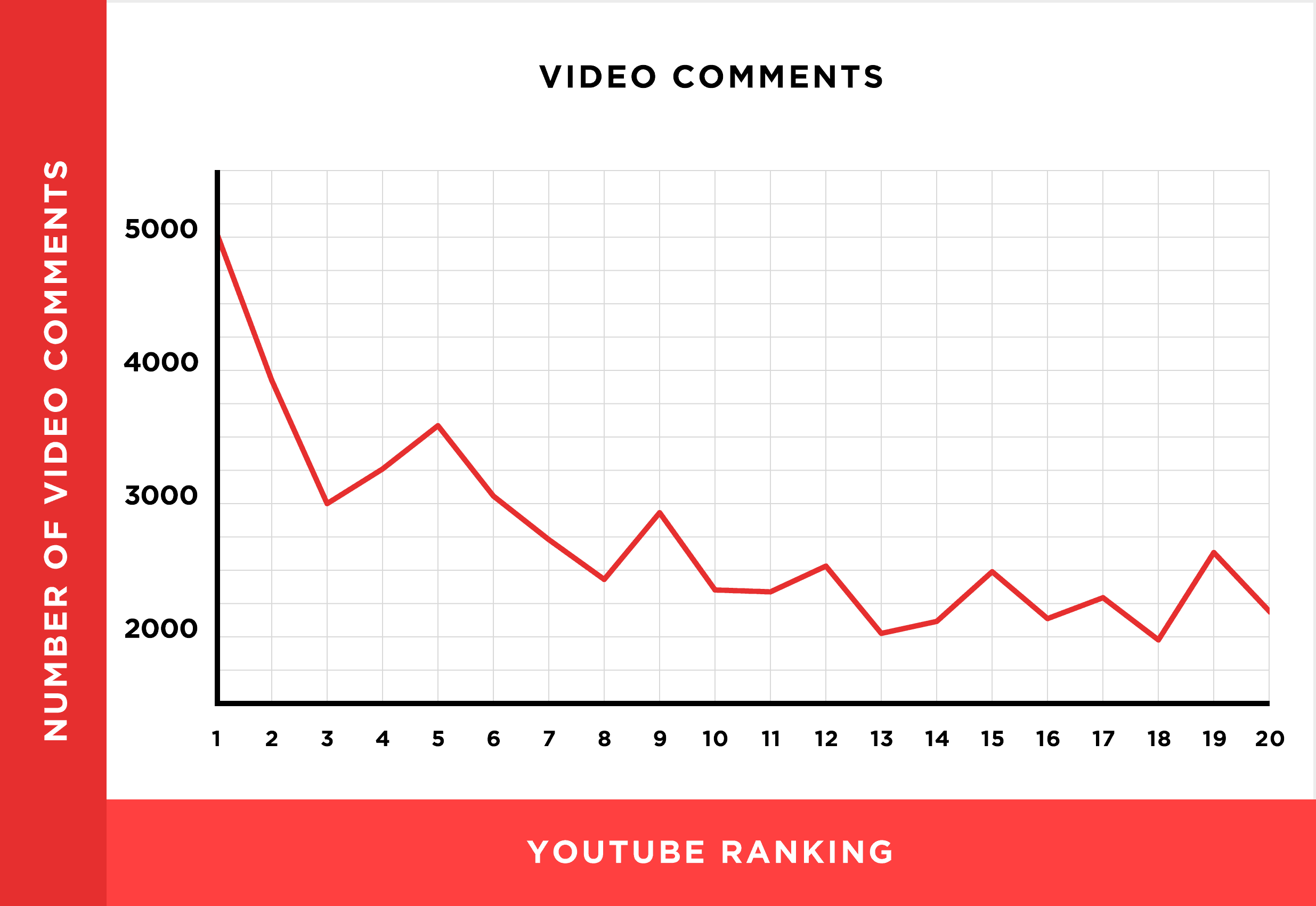 As you can see in the chart above, the more comments a video has, the higher it tends to rank. Considering YouTube’s emphasis on user engagement, this result isn’t a big surprise.

Key Takeaway: Videos with lots of comments tend to rank best in YouTube.

When it comes to video SEO, should you create short videos? Or are you better off with longer videos that cover a topic in-depth?

We analyzed our data to find out. 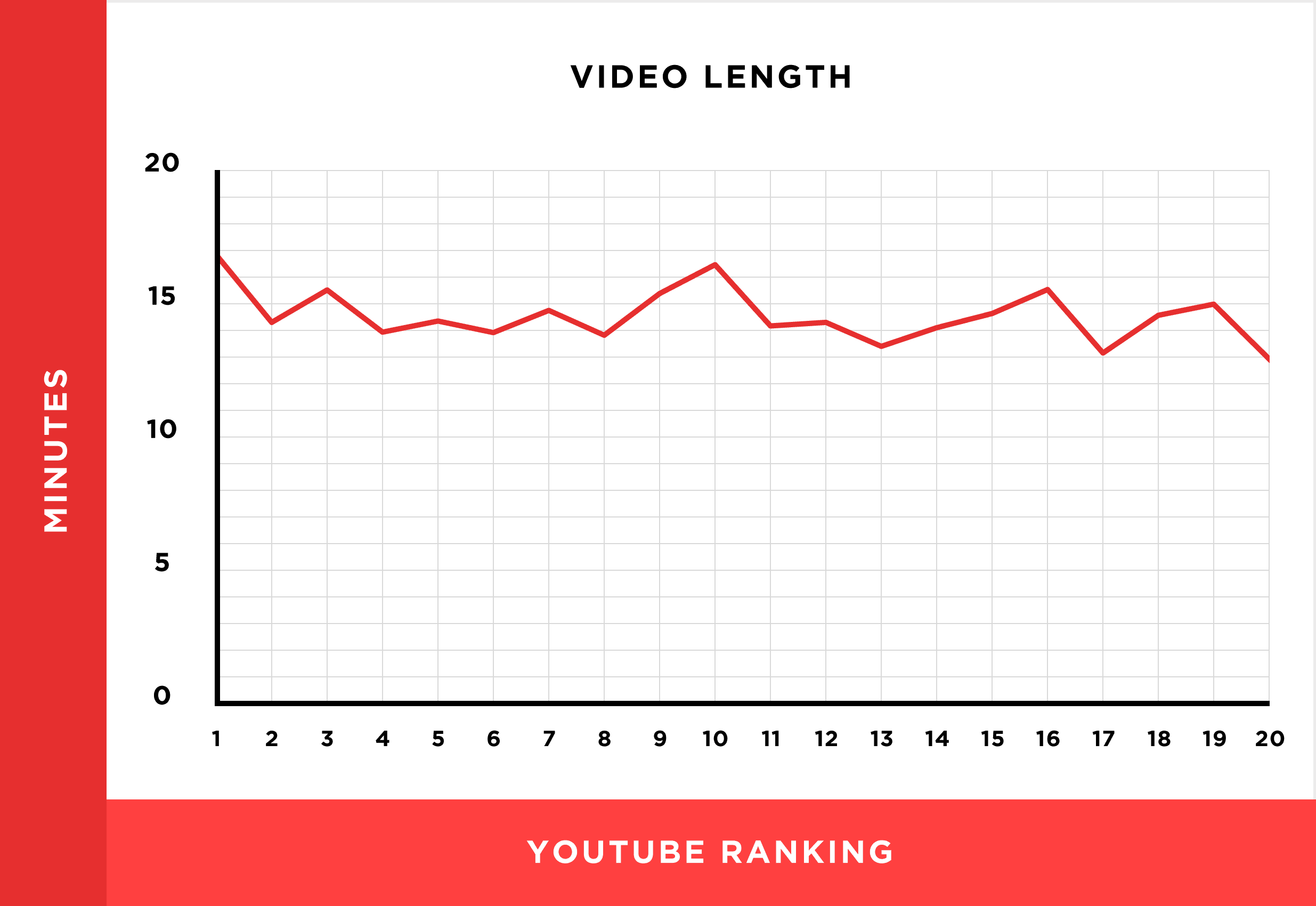 In fact, the average length of a video ranking on the first page of YouTube is 14 minutes, 50 seconds.

YouTube has publicly confirmed that a video’s total watch time is a key ranking signal. 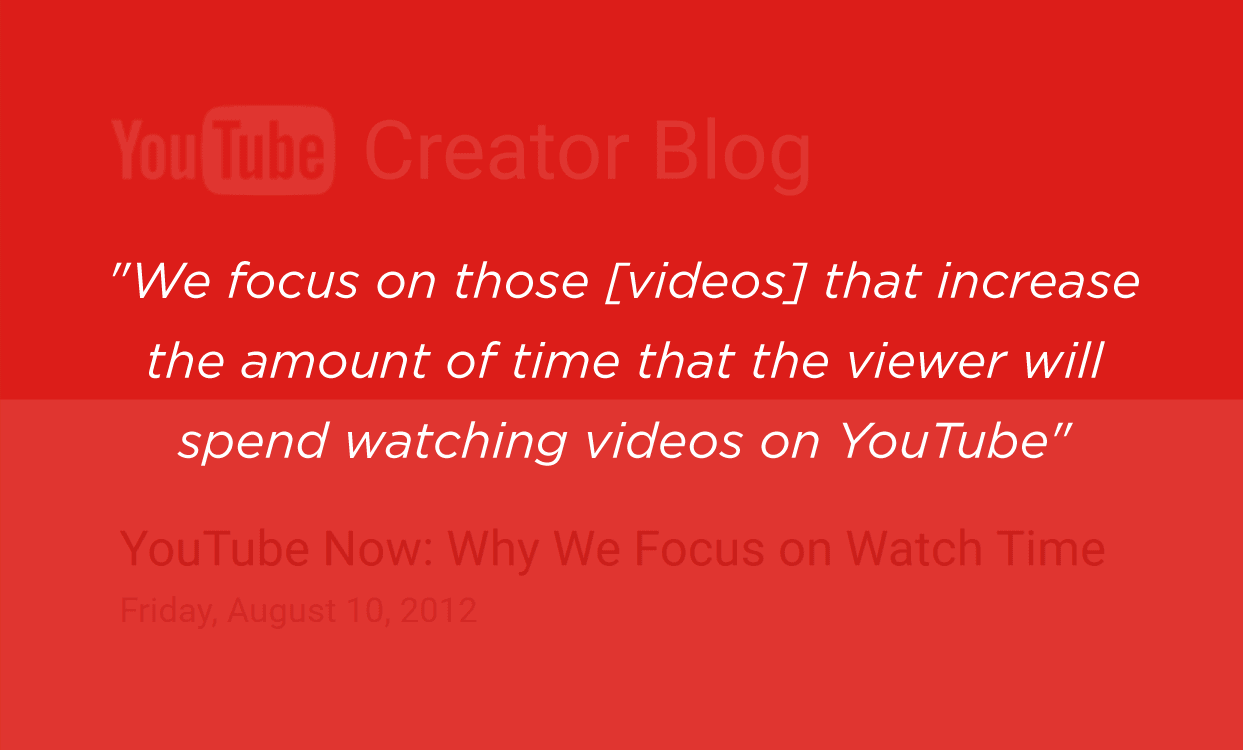 Also, in 2015, Google was granted a patent for an algorithm that uses “watch time” as a ranking signal.

In short, YouTube wants to promote videos that keep people on YouTube for a long period of time. Longer videos accomplish this best, hence the preference for longer video content.

In fact, if you do a cursory search of popular keywords, you’d be hard pressed to find a short video (< 3 minutes) ranking highly in the search results. 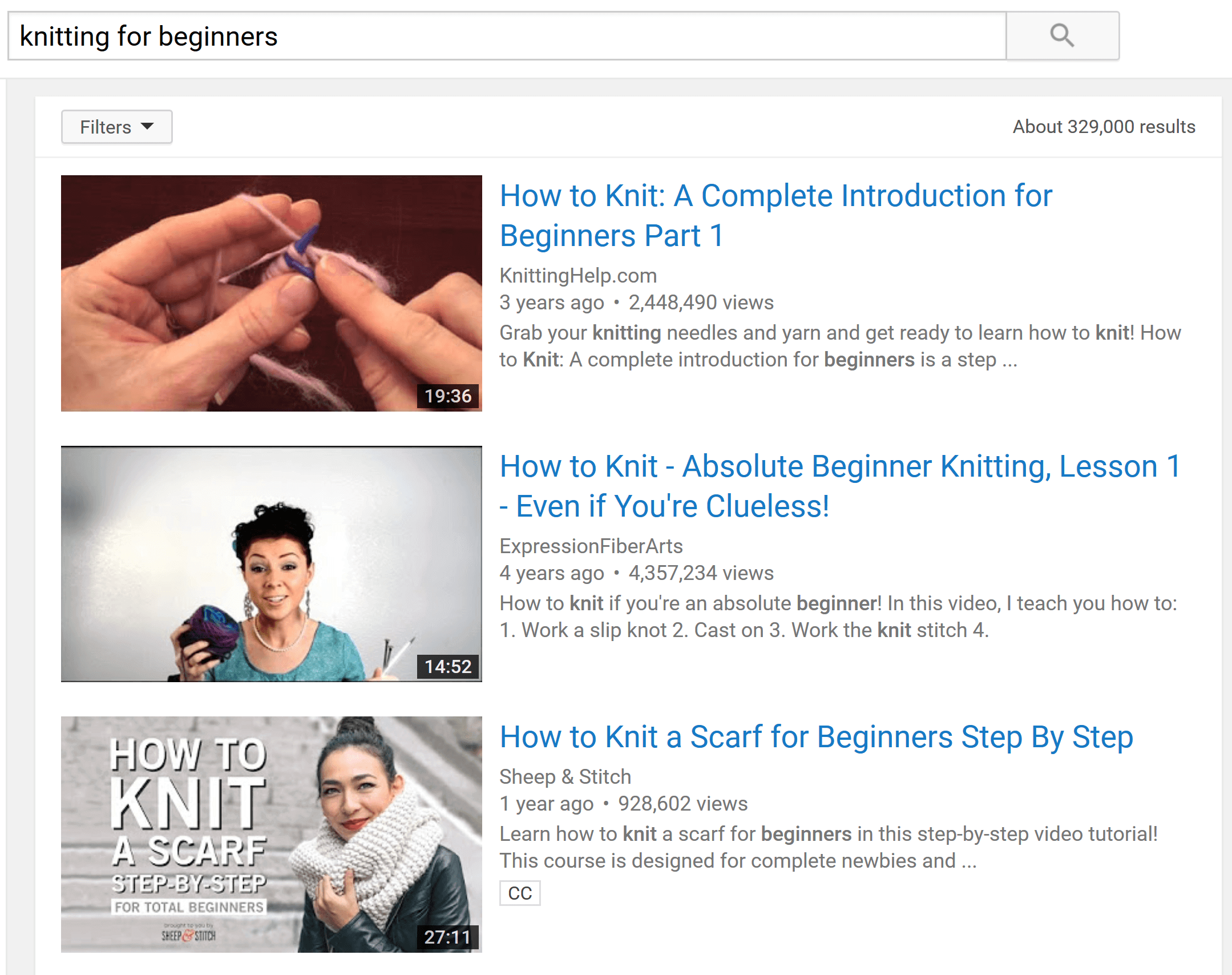 Google has consistently denied the fact that social signals play a role in their algorithm.

In fact, we did find that shares have a strong correlation with higher rankings in YouTube: 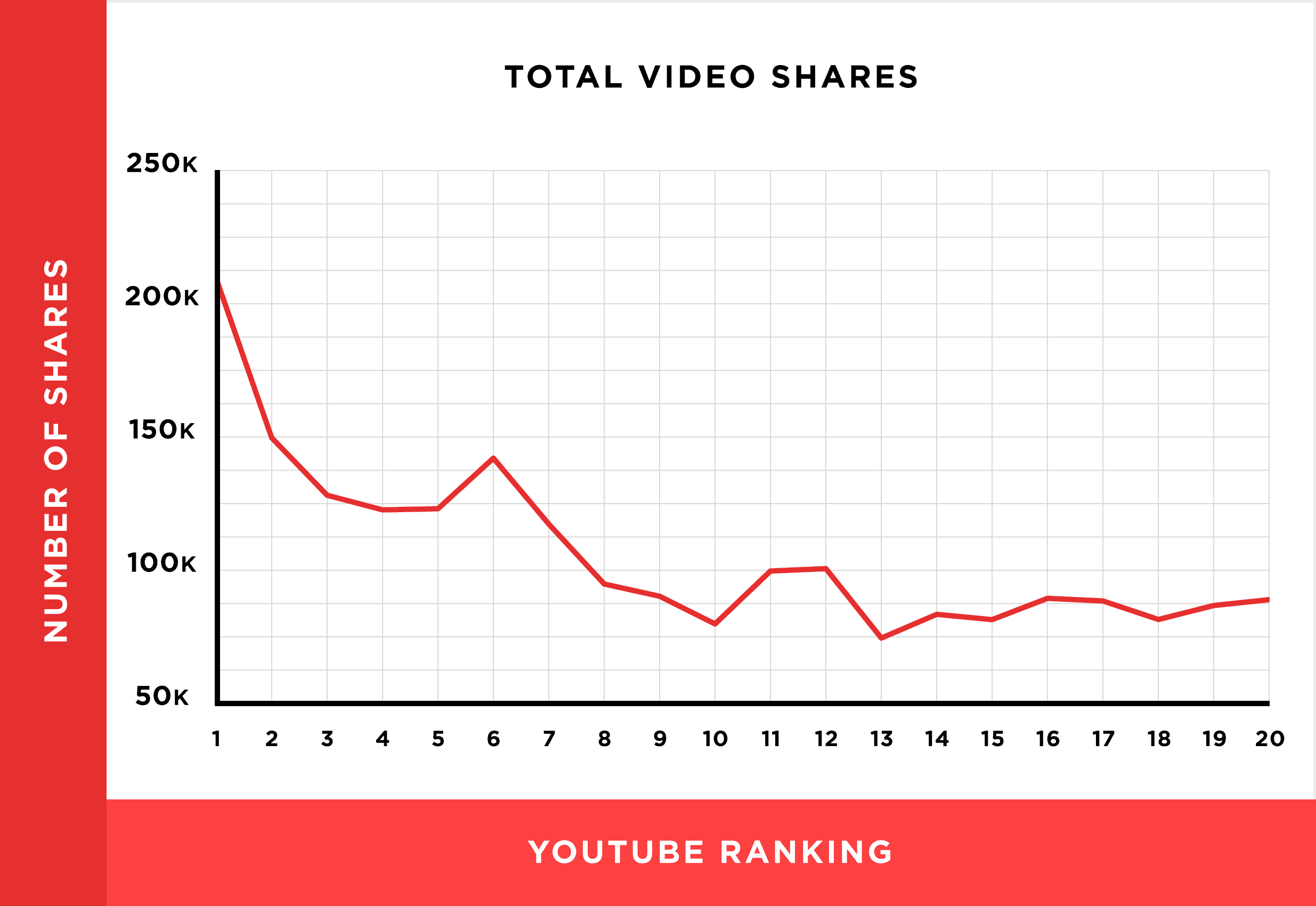 It’s important to note that we used YouTube’s public share report for this analysis.

Why is this important?

One of the major issues of using social shares as a ranking signal is that they’re easily gamed. Anyone can can hand someone a few dollars in exchange for sharing a piece of content 100 times on Facebook.

This tracking makes this signal much harder to game.

Combine that with the fact that YouTube encourages publishers to create highly-shareable content (and that YouTube reports shares in YouTube Analytics), and you have a strong possibility that the relationship between shares and rankings is more than a chance correlation.

A Video’s View Count Is Significantly Correlated With Rankings

However, YouTube discovered that views often serve as a poor indicator of video quality.

So they changed their algorithm to emphasize factors like audience retention and engagement: 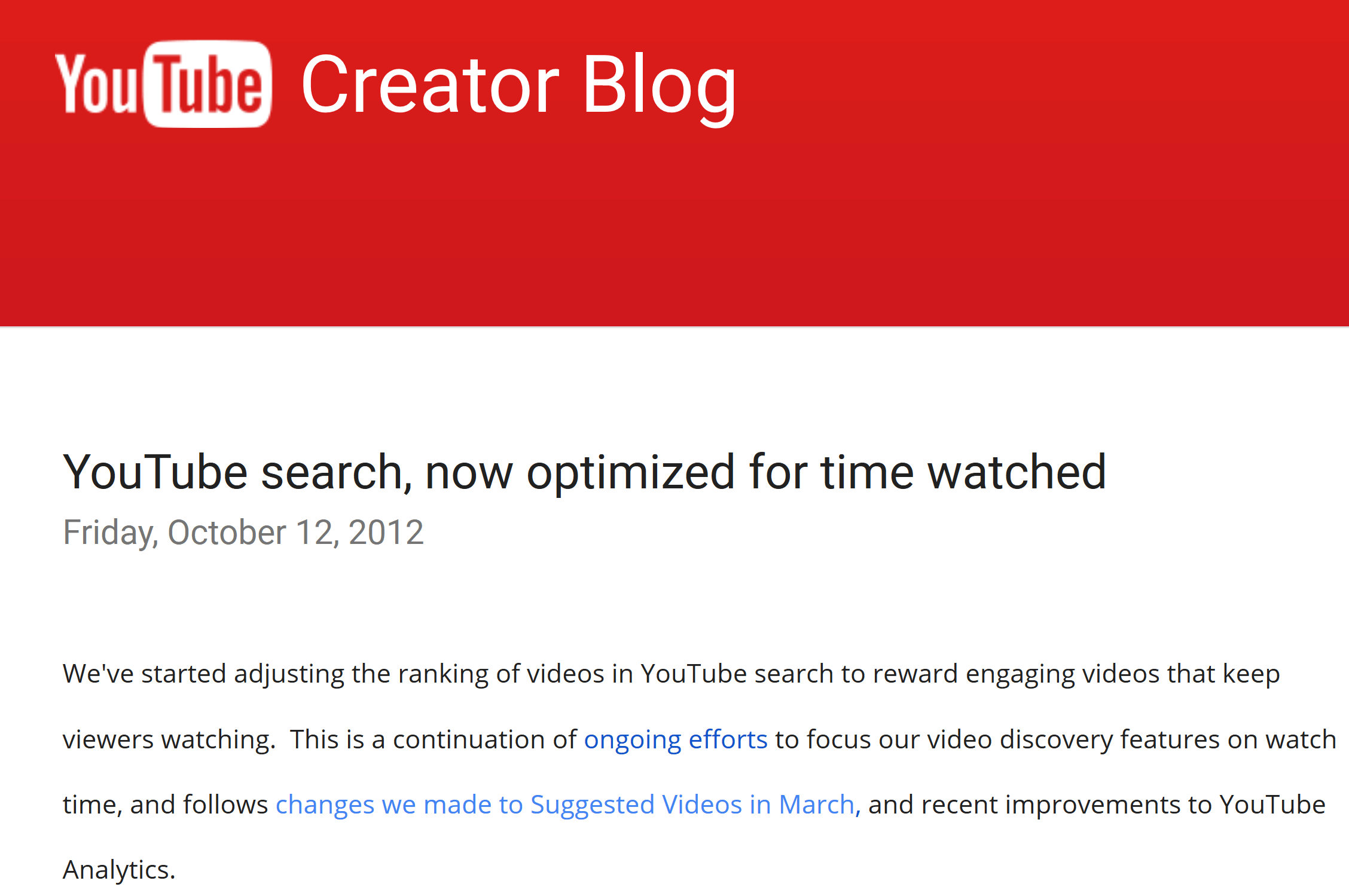 However, we discovered that a video’s total view count continues to have a significant correlation with rankings. 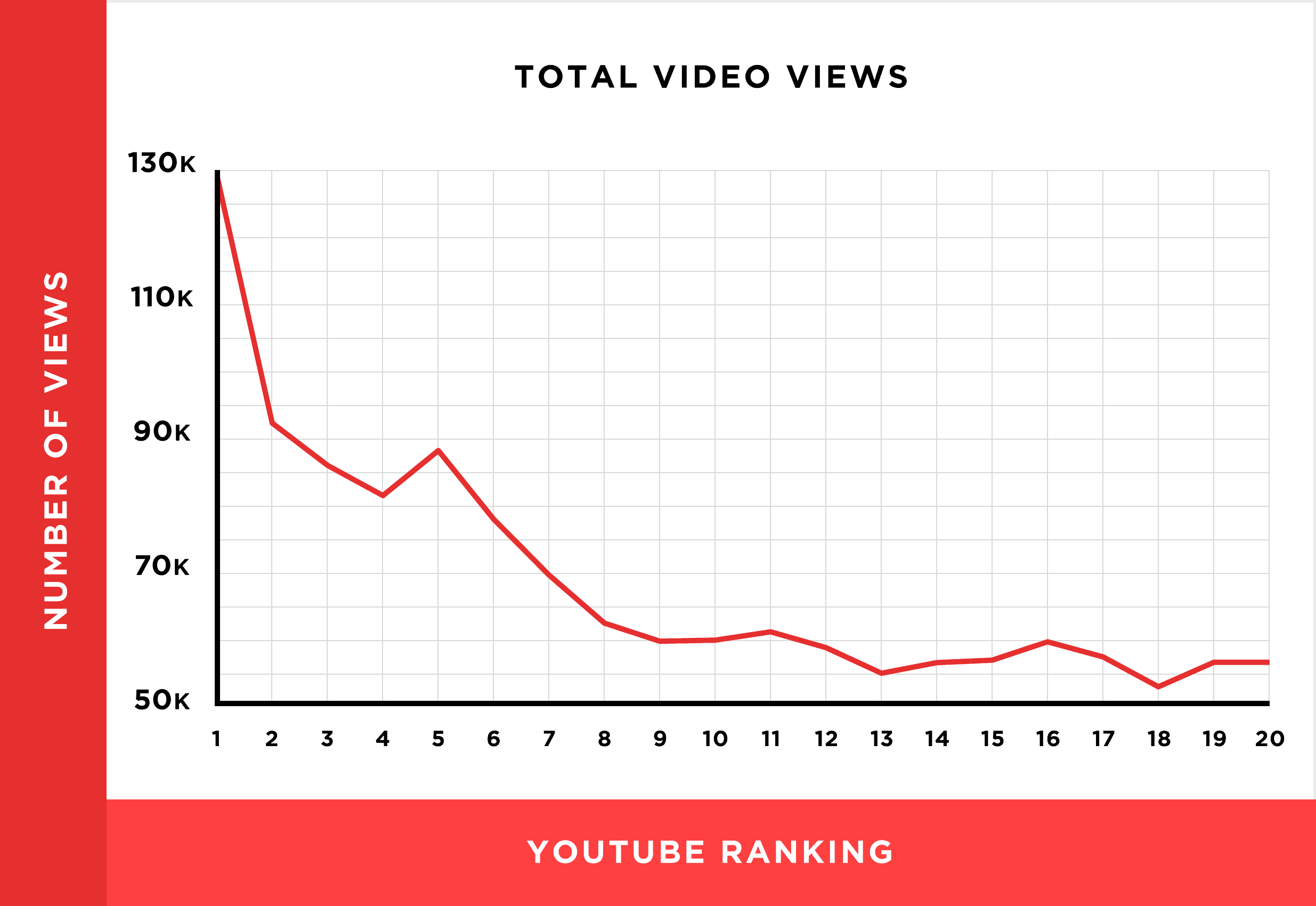 It appears that you still need a critical mass of views to rank in YouTube. (In fact a YouTube engineer stated that, while views aren’t as important as they once were, YouTube still uses them).

That’s because, without views, your video can’t generate the other signals that YouTube uses to evaluate your video’s quality (like total watch time and comments).

But at a certain point, views have diminishing returns. 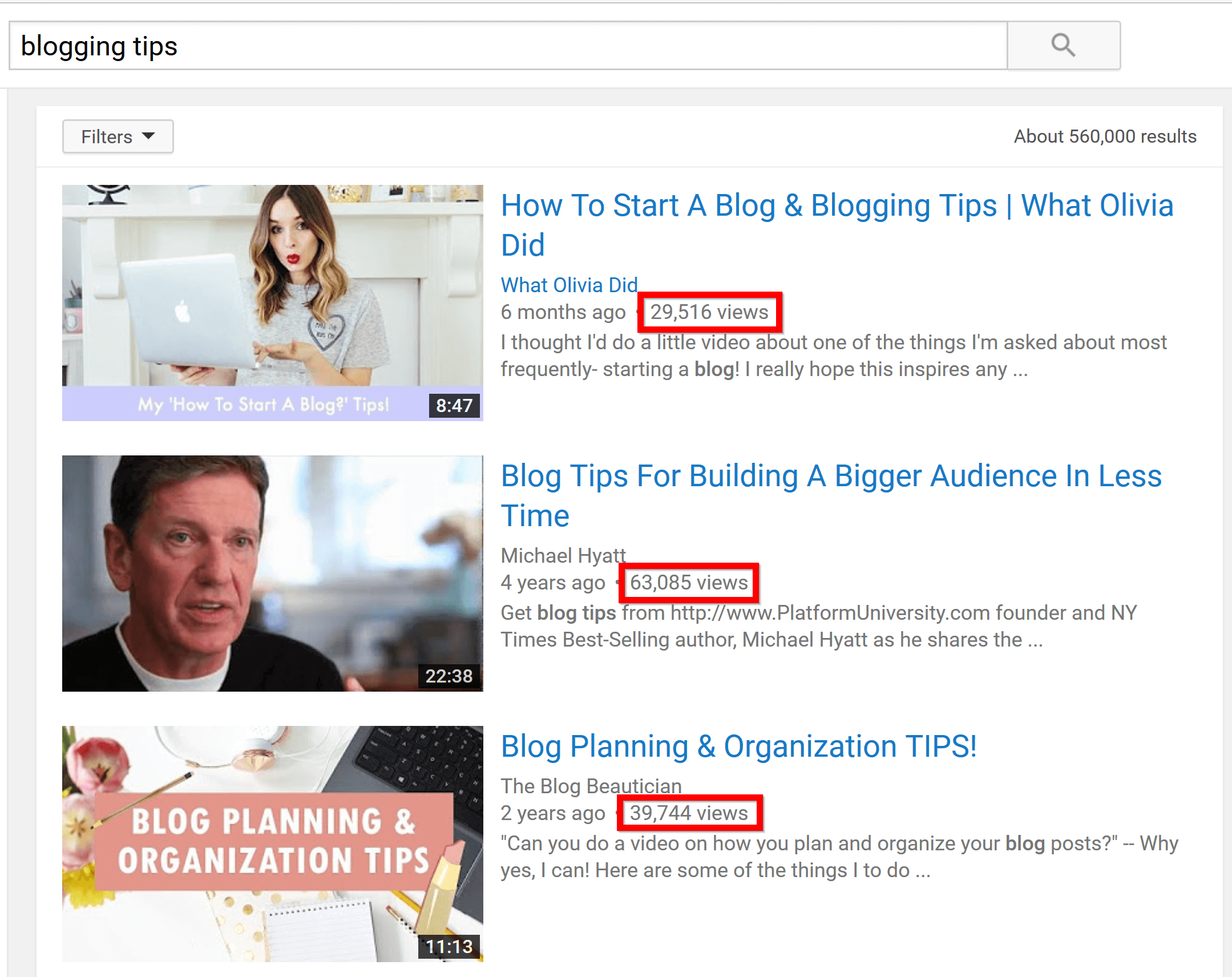 A Channel’s Subscriber Count Is Moderately Correlated With Rankings

We found a moderate correlation between a channel’s total subscribers and rankings: 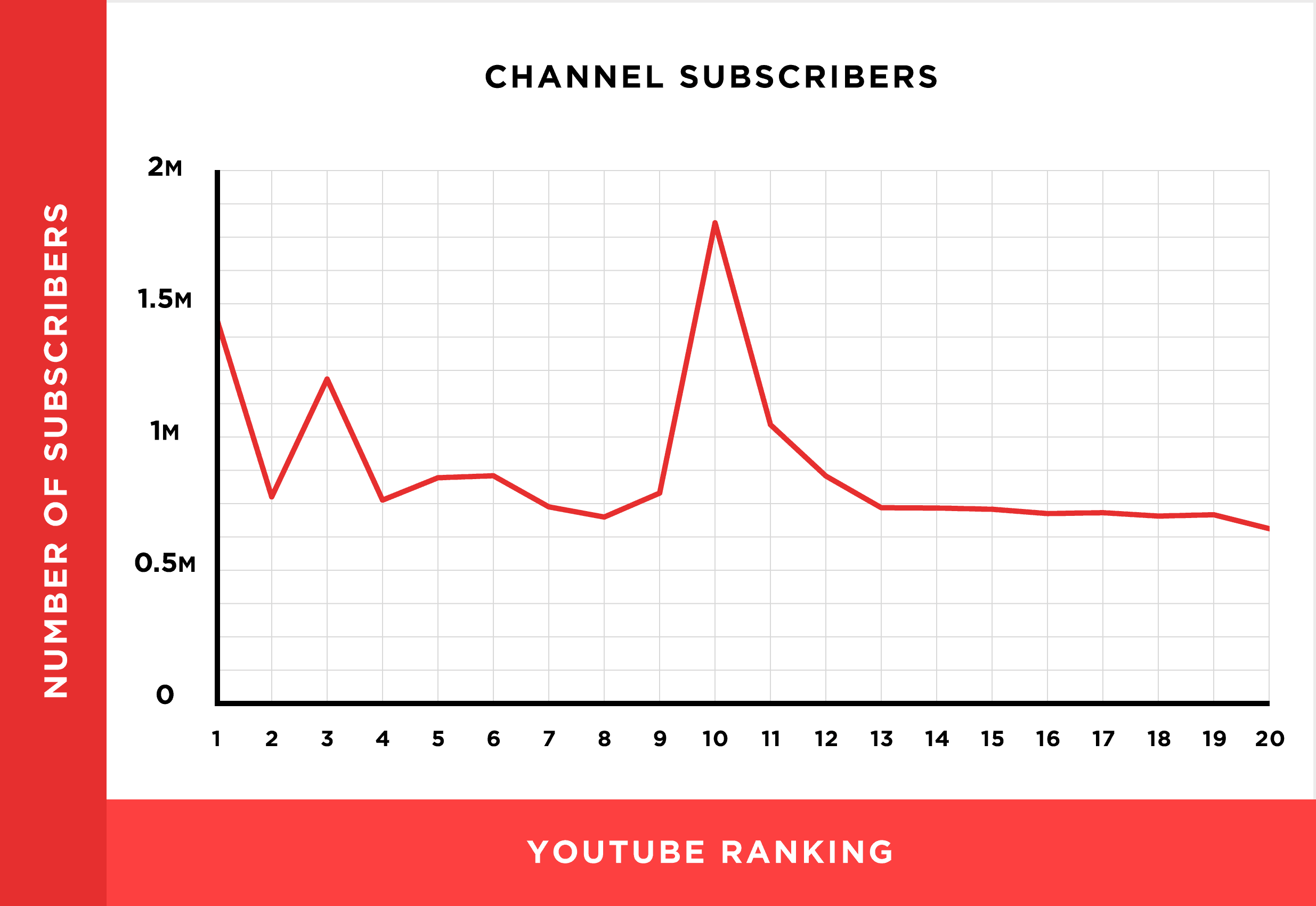 This is good news if you run a small or new channel.

Unlike Google, which seems to have a preference for big brands, YouTube is more likely to rank content from “the little guy”.

For example, for this popular keyword, videos from two small channels outrank a video from a channel that has over 2 million subscribers: 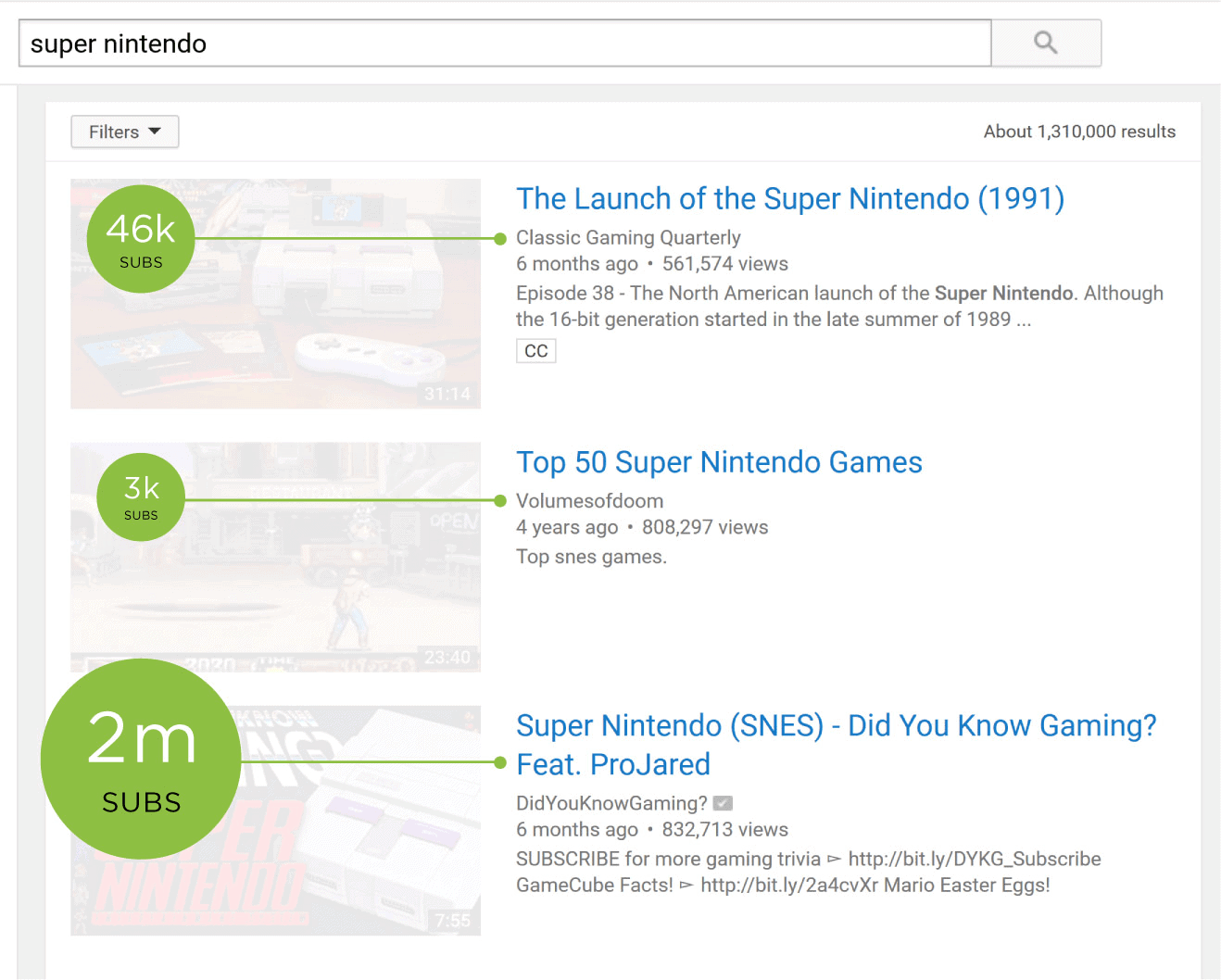 (Of course, channels with millions of subscribers have an edge. But our data shows that this advantage isn’t as significant as you may think).

Key Takeaway: Channels with lots of subscribers have an advantage in YouTube. However, videos from smaller channels consistently outrank videos from popular channels.

It’s no secret that YouTube prefers videos that engage their audience.

And video “likes” serve as a powerful engagement signal. After all, likes are a crowdsourced way of evaluating how the YouTube community feels about your video.

That’s the theory. But what does the data say?

Our study revealed a significant correlation between likes and video rankings: 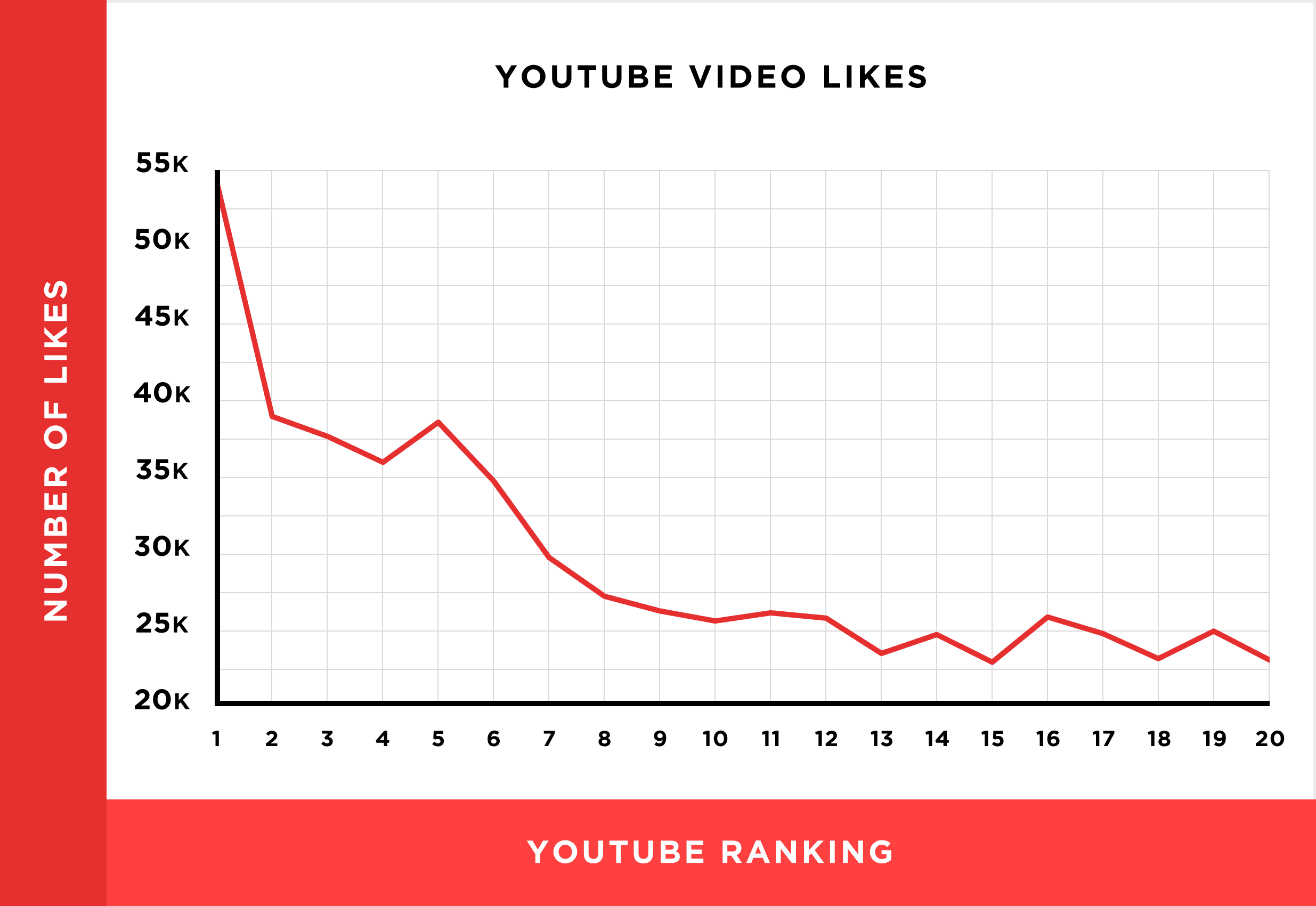 This suggests that YouTube may use likes as a ranking signal.

However, as you know, correlation doesn’t always mean causation.

Videos with lots of likes are also likely to be high-quality. And high-quality videos generate other ranking signals (like audience retention) that YouTube values.

Key Takeaway: YouTube may use likes as a direct ranking factor. Or it could be that heavily-liked videos generate other signals that YouTube truly cares about.

If someone really enjoys a video on YouTube, what are they likely to do? Subscribe to that channel so they can see that channel’s future videos.

In other words, a video that encourages lots of new subscribers is a sure sign of quality.

Not only that, but getting new subscribers is an extremely hard metric to game at scale.

Sure, you can get a few people (or bots) to subscribe to your channel after watching a video. But it’s much more difficult than generating thousands of fake views or likes.

Knowing that, its likely that YouTube uses “subscriptions driven” as a ranking factor.

Our data did indeed show a significant correlation between “subscriptions driven” and higher video rankings. 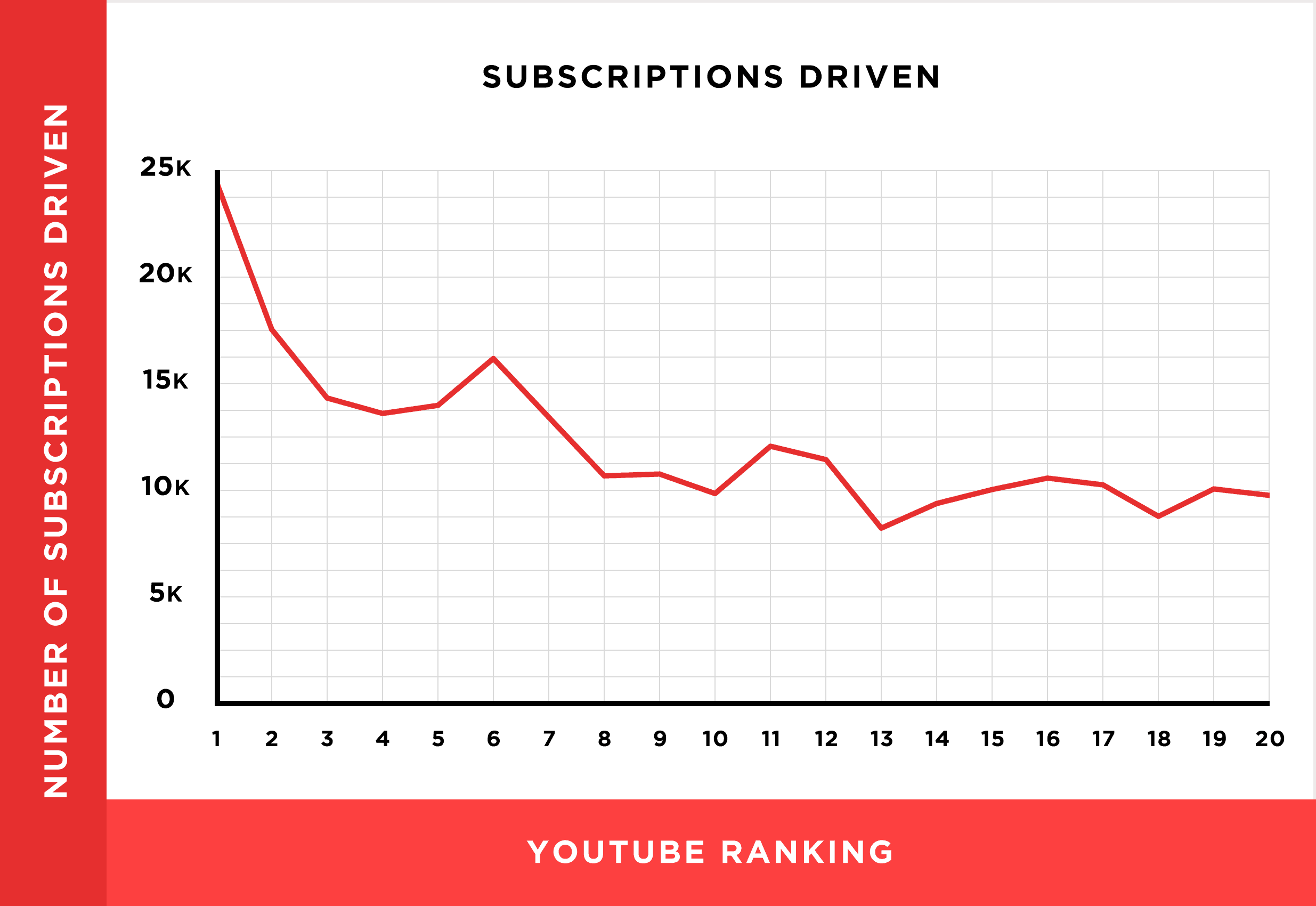 As they do with shares, YouTube displays the number of subscriptions driven underneath each video:

(Publishers can choose not to show this information publicly).

Like with most metrics, you can boost the number of subscribers your videos generate by creating world-class video content. 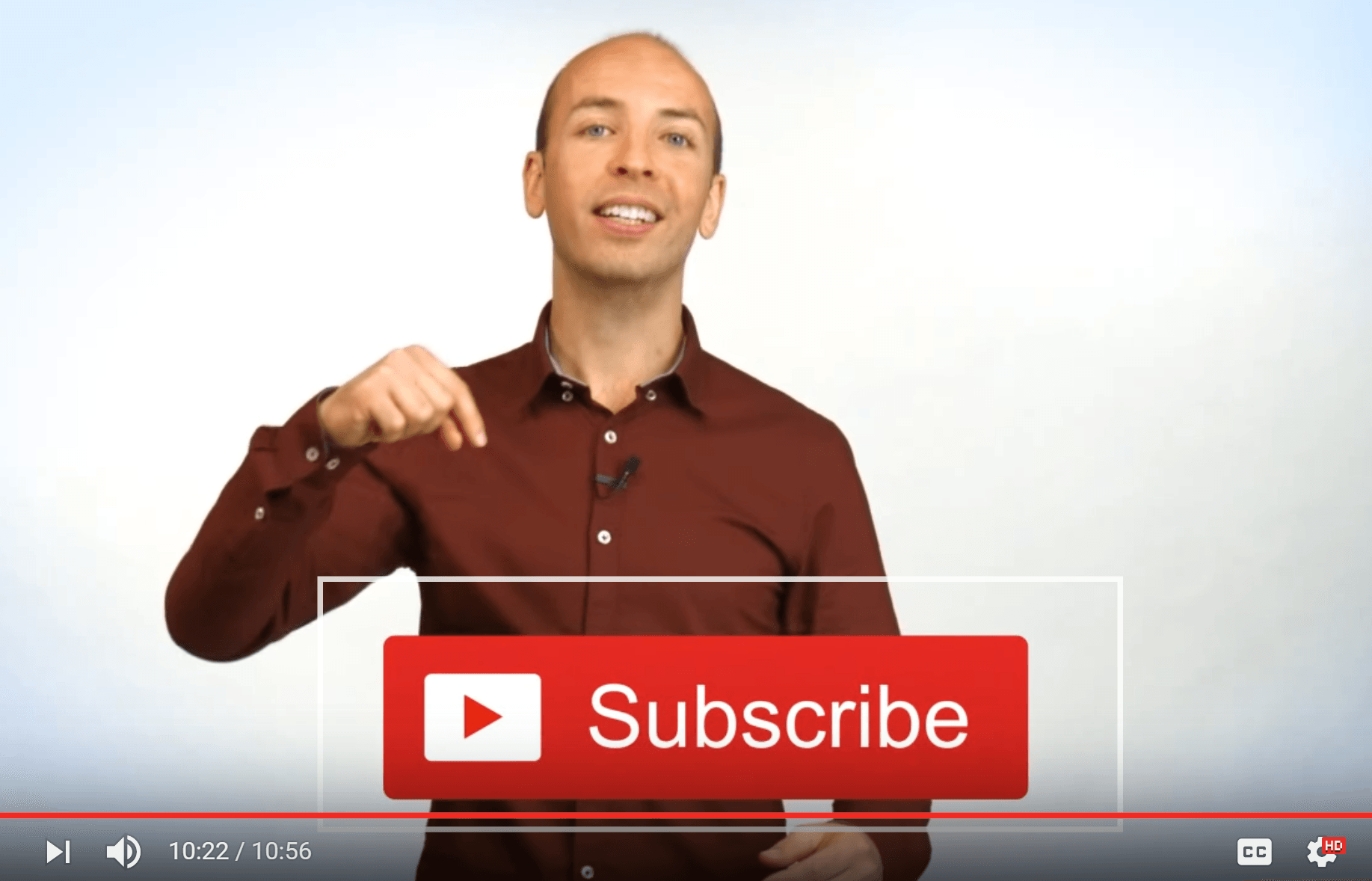 I’ve found that a clear call-to-action to subscribe significantly boosts my “subscriptions driven” on each video.

Keyword-Rich Tags Have a Weak Correlation With YouTube Rankings

In the early days of online video, platforms like YouTube relied on metadata to understand your video’s topic.

For example, YouTube would analyze your video’s title, description, tags…even your video’s filename. Essentially, the more text you could attach to your video, the better.

Today, YouTube can “listen” to every word of your video (without needing you to upload a transcription): 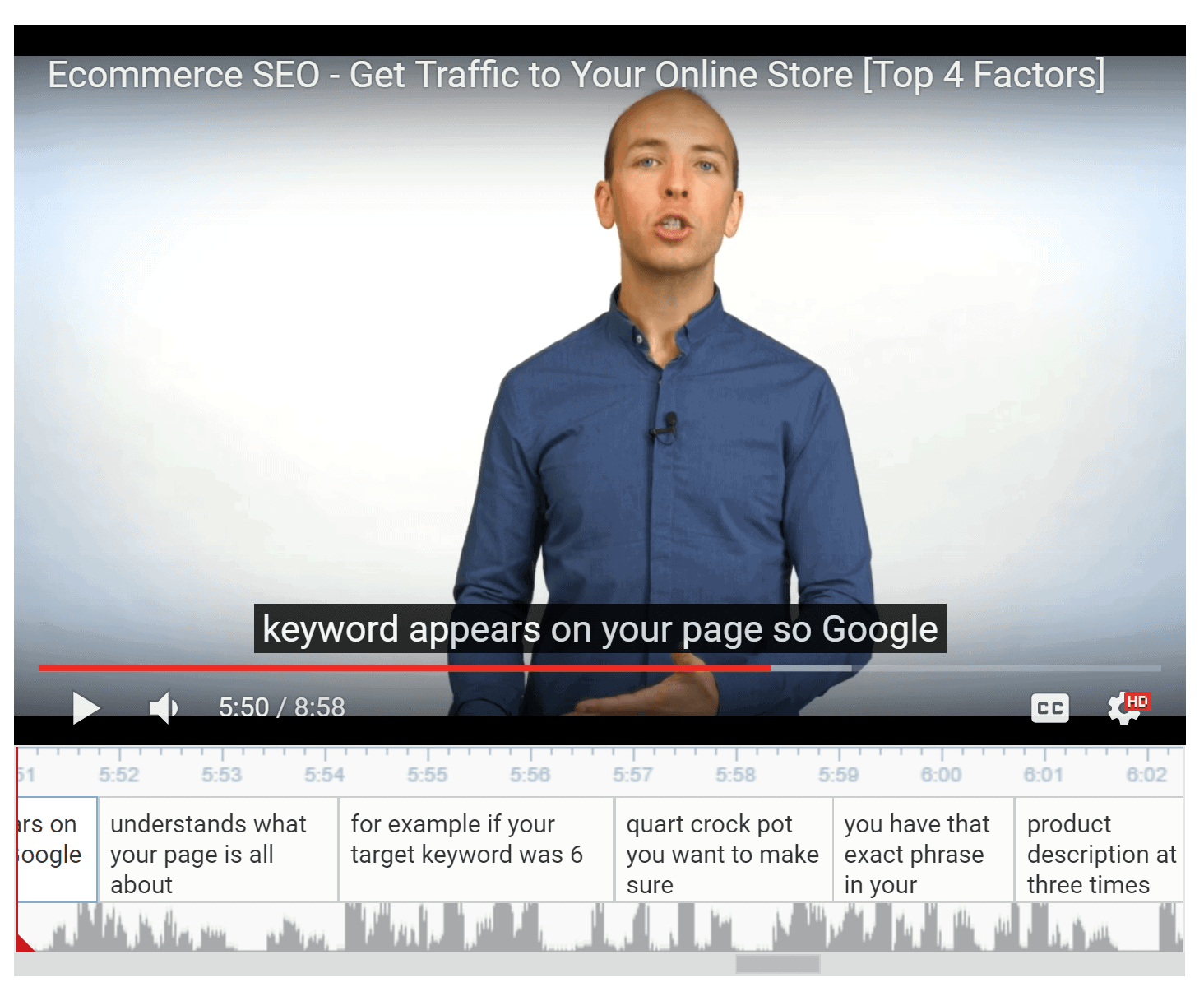 Knowing that, does YouTube still use video tag metadata?

We found a weak correlation between keyword-rich video tags and rankings: 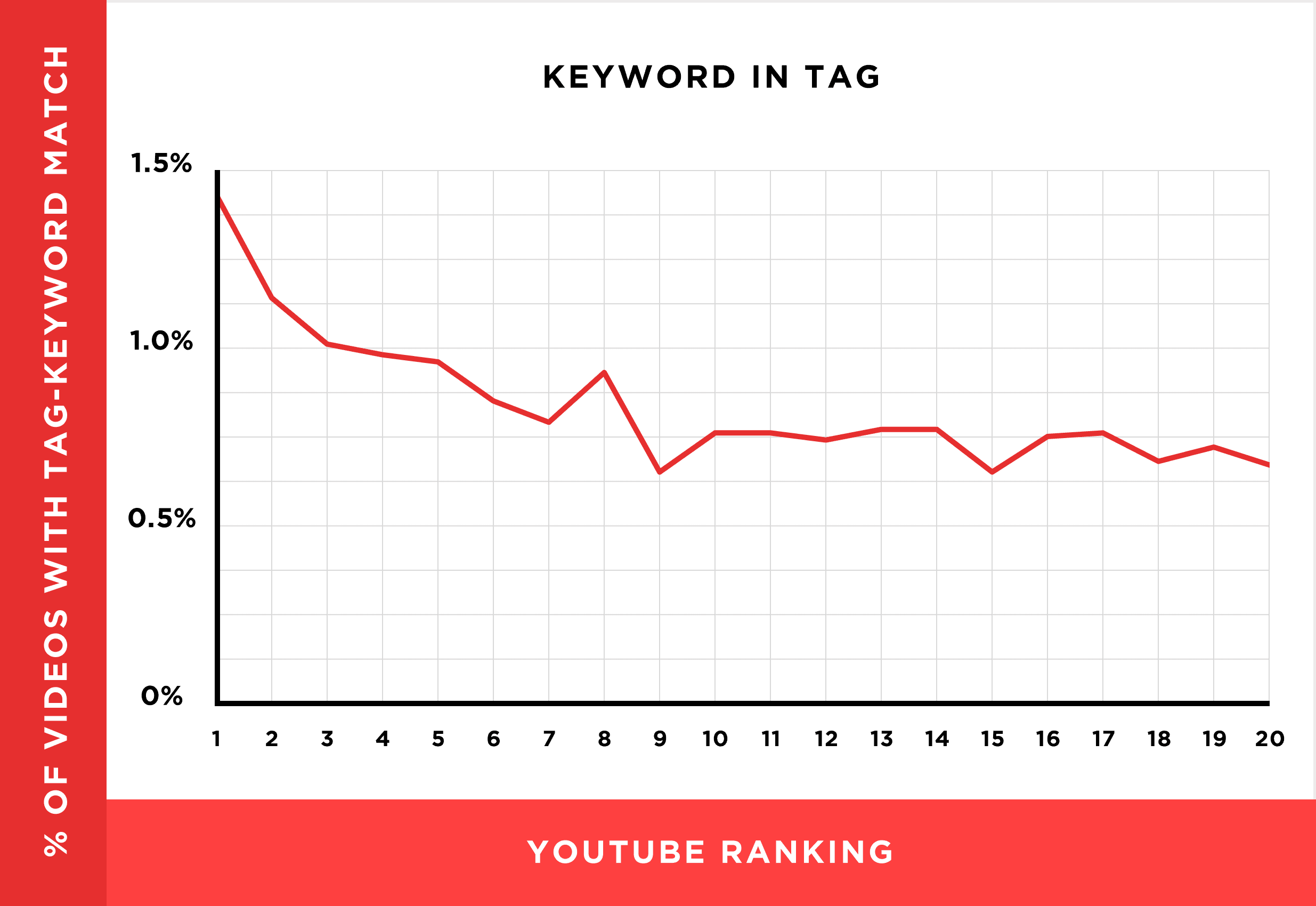 While tags don’t appear to be as important as they once were, our data shows that they still make a small dent. So it makes sense to use them.

(Also, YouTube recommends that you use descriptive tags. This suggests that they still use tags to understand the content and context of your video).

Key Takeaway: Including your target keyword as a tag may help with rankings. But the overall impact of tags appears to be small.

Traditionally, you video’s title was piece of metadata that YouTube put a lot of emphasis on.

However, we found that including an exact keyword in your video title only has a slight potential impact on rankings: 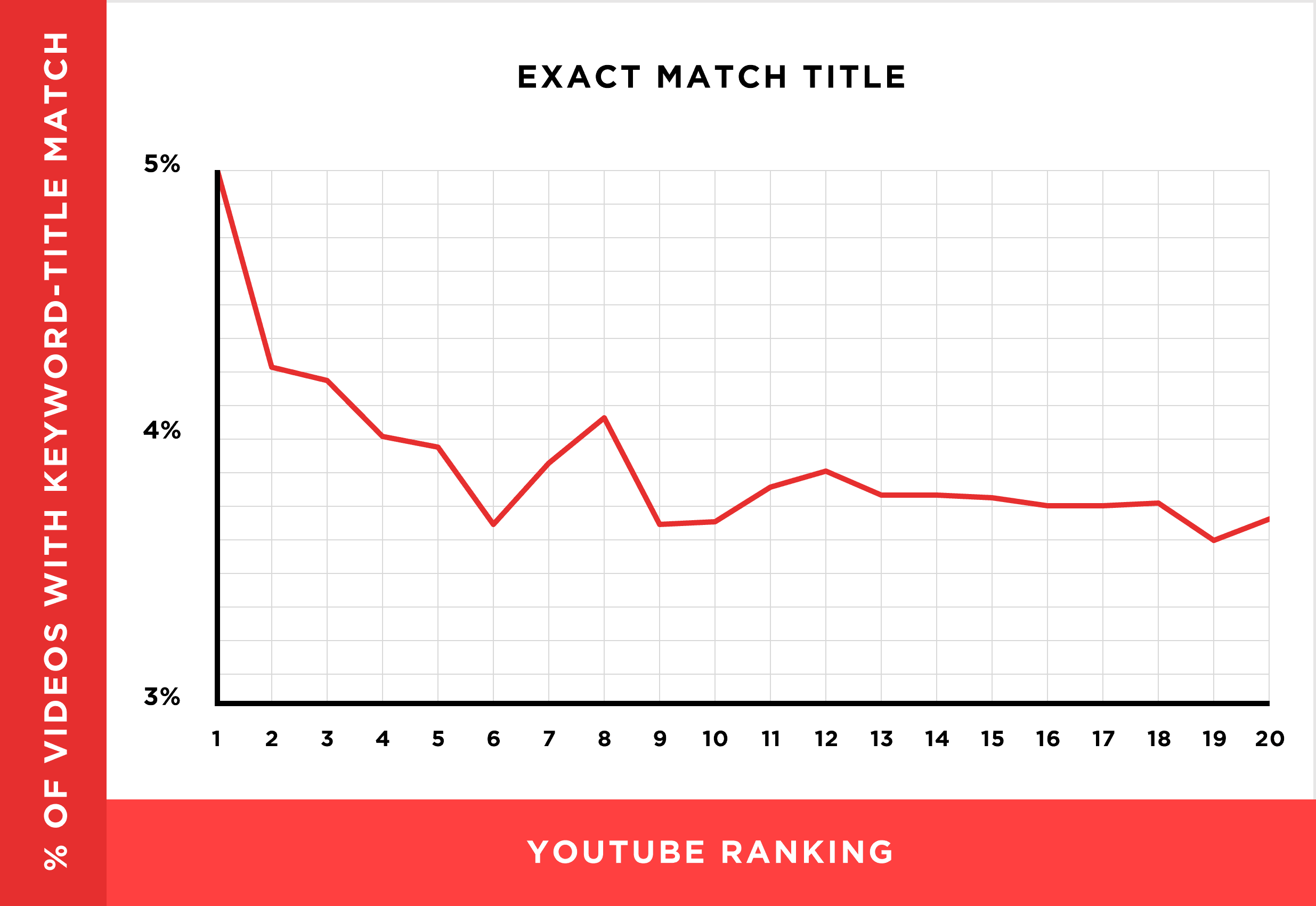 These findings could mean a few things:

It could be that YouTube has de-emphasized the importance of video titles. However, this seems unlikely as YouTube has stated that: “Titles contain valuable information to help viewers find your videos in search results.”

What’s more likely is that YouTube has developed a deeper understanding of a title’s meaning (beyond simple keyword matching).

In other words, they may use a less-sophisticated version of Google’s semantic search. If so, YouTube wouldn’t need to see a specific keyword in your title to rank you for that query. A synonym would do the job.

In fact, its common to see videos ranking well in YouTube for popular keywords…even when they don’t contain the exact term in their title. 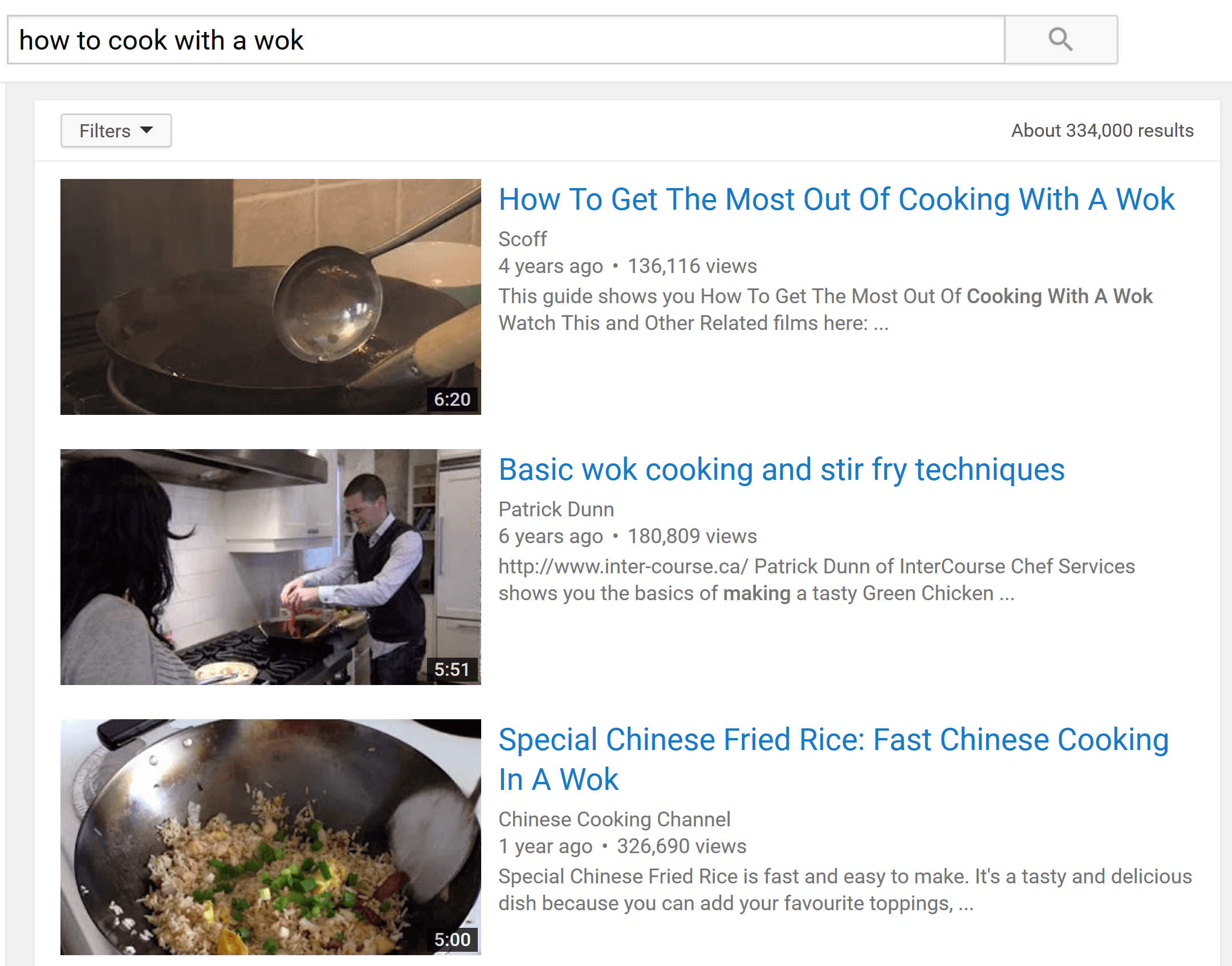 Key Takeaway: Using your target keyword in your title may help you rank for that term. However, the relationship between keyword-rich video titles and rankings is very weak.

Does including a keyword in your video description help you rank for that term?

According to our data, keyword-optimized descriptions don’t have any impact on rankings: 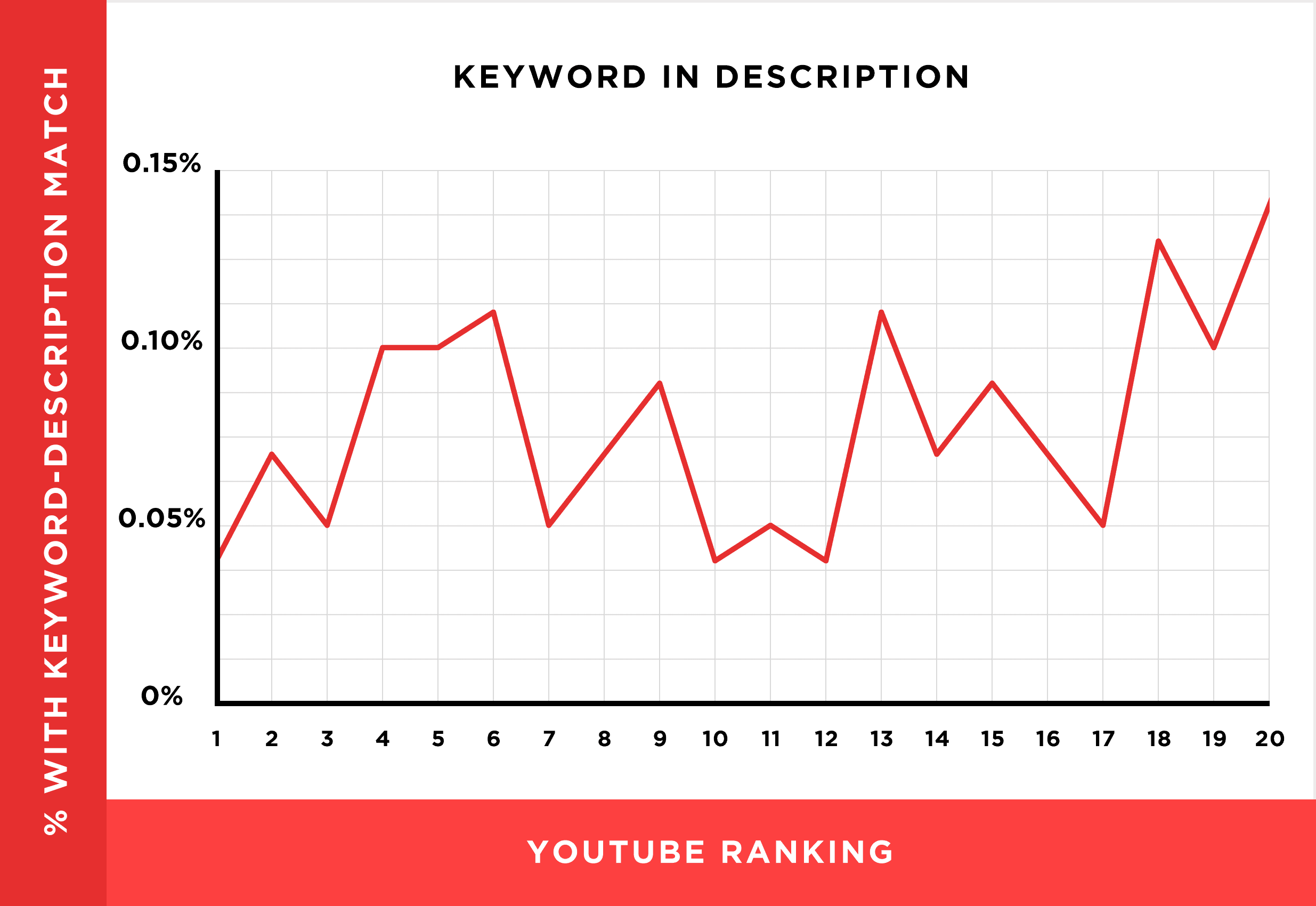 There are a few possible explanations for this finding:

Second, there’s the possibility that YouTube uses “keyword appears in a video’s description” as a ranking signal, but it’s so small that we weren’t able to measure it. In fact, we found several videos with no description at all ranking highly on the first page. This implies that your video description isn’t nearly as important as user-generated signals (including views and “subscriptions driven”).

Third, it could be that YouTube now ignores video descriptions as a ranking factor. This is unlikely as YouTube states that: “Well-written descriptions with the right keywords can boost views and watch time because they help your video show up in search results.”.

Despite this finding, I still recommend writing keyword-rich descriptions.

An optimized description helps you show up in the suggested videos sidebar, which is a significant source of views for most channels.

Key Takeaway: There’s no correlation between keyword-optimized descriptions and rankings for that term. However, I still recommend writing keyword-rich descriptions as they can help your video rank for related terms (and appear as a “suggested video”).

Do high-definition or standard-definition videos perform best in YouTube search? 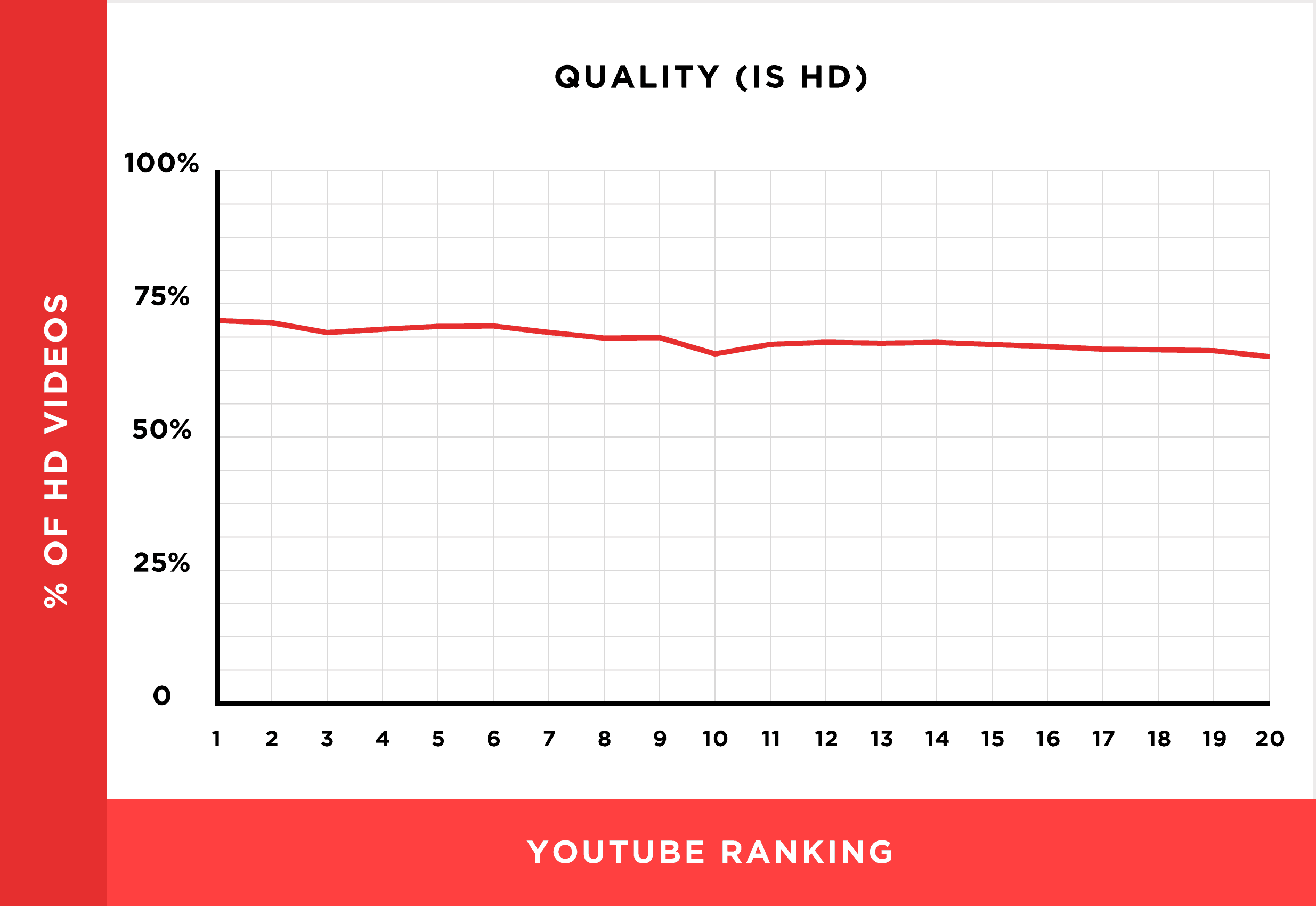 This data can be interpreted in two ways:

First, it could be that YouTubers that create the best video content also tend to record in HD. Therefore, this is an instance of correlation only telling part of the story.

It’s difficult to determine the full impact of HD vs. SD from our correlation data alone.

Regardless, the vast majority of videos that rank well in YouTube are in HD. In fact, 68.2% of all videos on YouTube’s first page are in HD.

I’d like to thank Qi Zhao for helping us with statistical analysis for this study.

And if you’re curious about how we conducted this study, here’s a link to our methods.

Which result was most surprising to you?

Or maybe you have a question.

Either way, leave a quick comment below right now.