How 3 “Normal” People Defied The Odds, Beat Up On Their Big Brand Competitors (and Got a Ton of Organic Traffic In The Process)

And to prepare for the big launch, I read dozens of SEO blog posts and forum threads.

So when my blog finally went live, I was super excited.

I thought to myself: “It’s only a matter of time before you hit Google’s first page.”

There Was Only One Problem:

In fact, I struggled to get ANY traction with that site…

…despite the fact that I followed all of the SEO advice that I read to a “T”.

Flash forward to today and Backlinko brings in over 180k unique visitors per month: 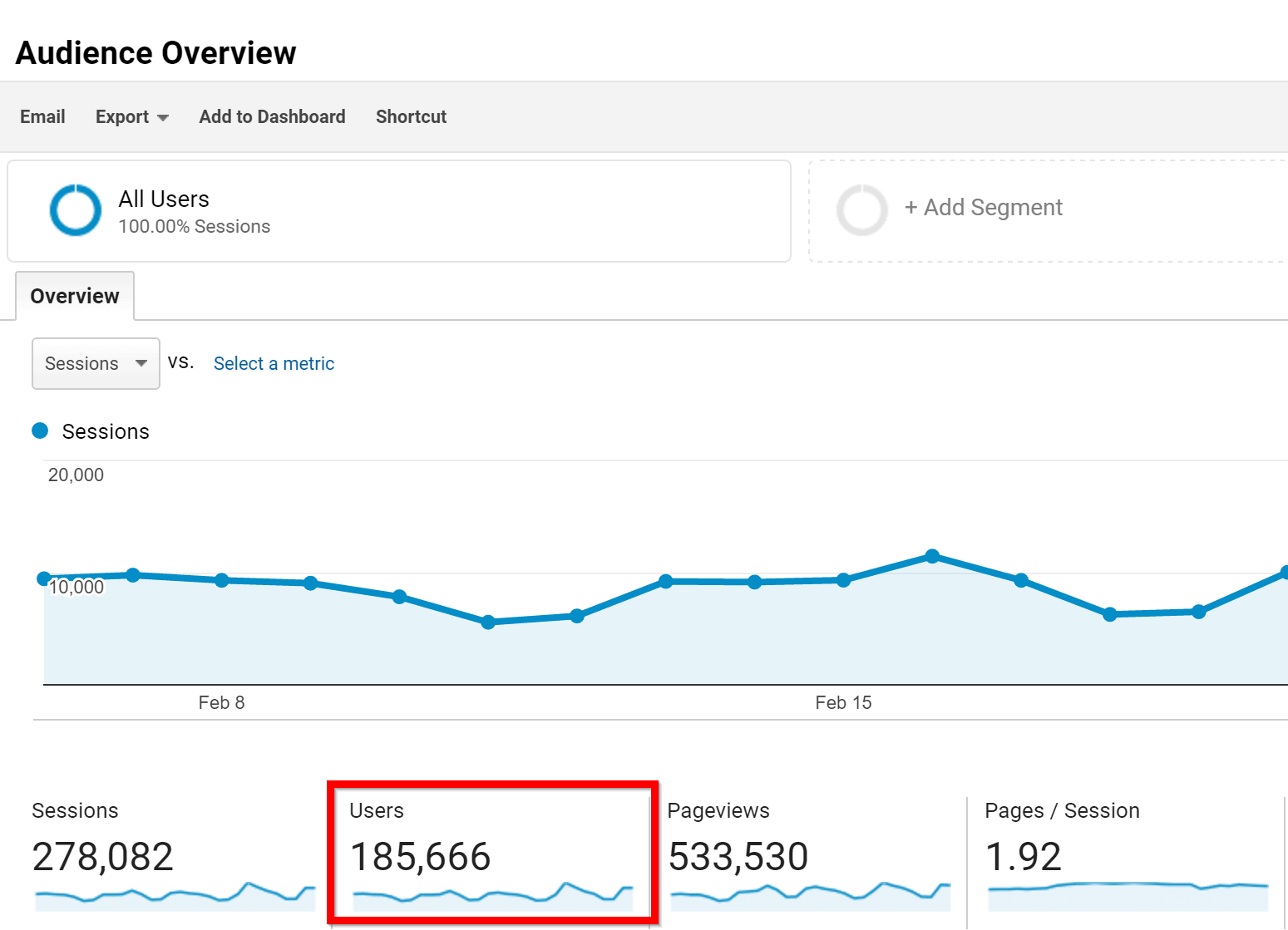 And all of this high-quality organic traffic fuels my online business that’s nearly doubling in gross revenue every year:

Now I’ll show you how I did it in a minute.

But First, I Want to Tell You Something Important:

You can totally do this!

After all, I’m not the only one that’s growing their online business with a unique approach to white hat SEO:

Here’s The Framework Aaron, Darren and David Used To Achieve These Impressive Results

The simple fact about succeeding with white hat SEO is this:

You simply can’t do what everyone else is doing and expect to get results.

As a refresher, that framework is:

Do The Opposite Framework

If you follow the same SEO advice as everybody else, there’s no way you can win. That’s because you’re playing the game by the same rules as everyone else (including big brands).

But with the Do The Opposite Framework, you do the opposite of everyone else. That’s the secret to beating your competitors in Google.

How about an example?

With my first blog I launched in 2010, I blindly followed the SEO advice that I read online.

And every blog post I read said the same thing:

“The key to ranking in Google is to keep your site updated with fresh, quality content.”

So that’s exactly what I did.

I updated my site like a madman. Sometimes I’d even publish two articles a day.

Unfortunately, despite all that hard work, my traffic was as flat as a pancake:

Today, I Understand EXACTLY Why I Struggled…

It’s because I was doing the exact same thing as everyone else!

My competitors were pumping out tons of content. So was I.

My competitors published new post at least once a week. So did I.

My competitors didn’t do any outreach or strategic content promotion. Neither did I.

Do you see what’s happening here?

As long as I played by the same rules my competitors did, I had no chance (especially because I was competing against big brands).

Today, I Use the “Do The Opposite Framework” with Backlinko’s SEO…

As you may know, most marketing blogs publish a new post every day or week.

But I do the opposite.

I publish a new blog post every 4-6 weeks. In fact, I’ve only published 34 total posts at Backlinko so far: 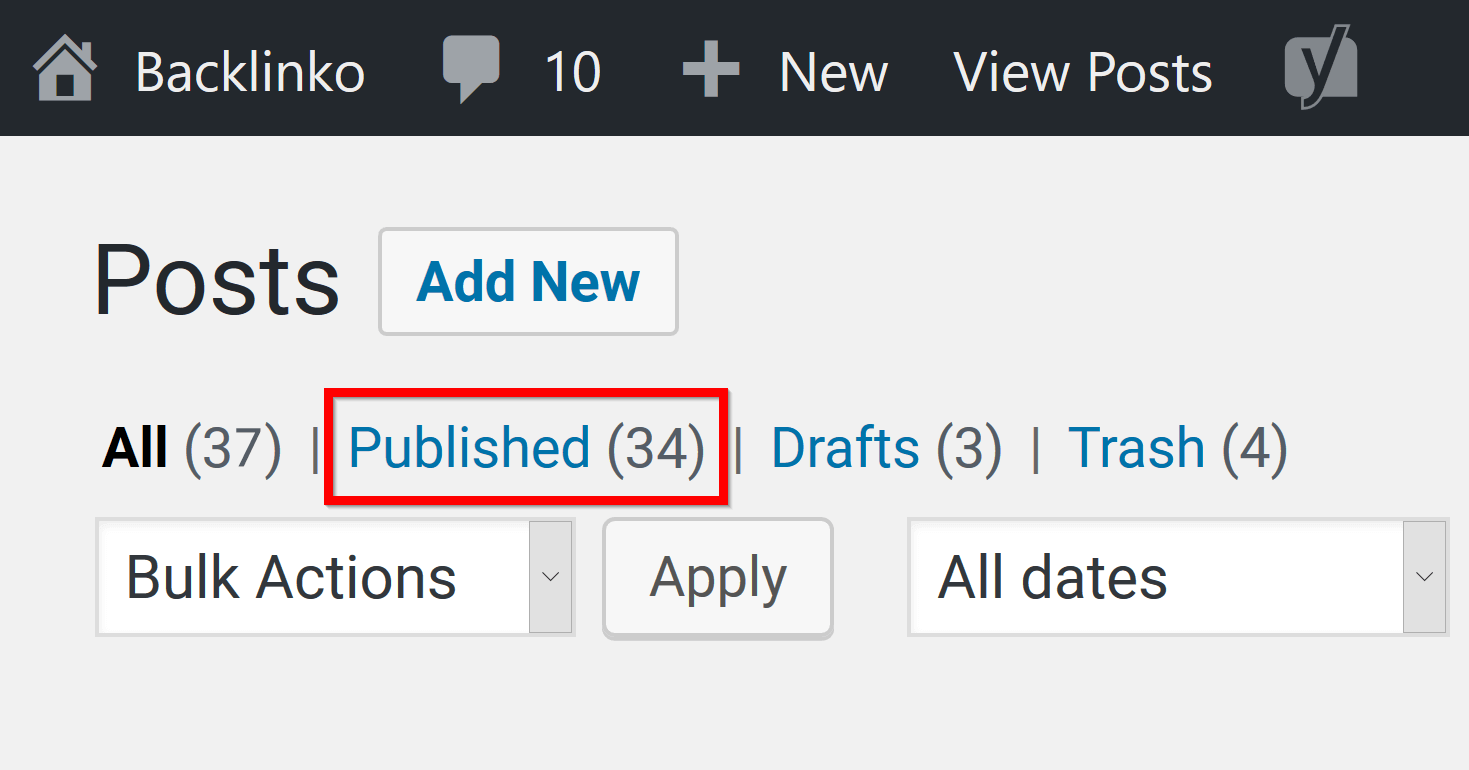 Despite that (actually, BECAUSE of that), Backlinko has brought in 1.7 million unique visitors over the last year: 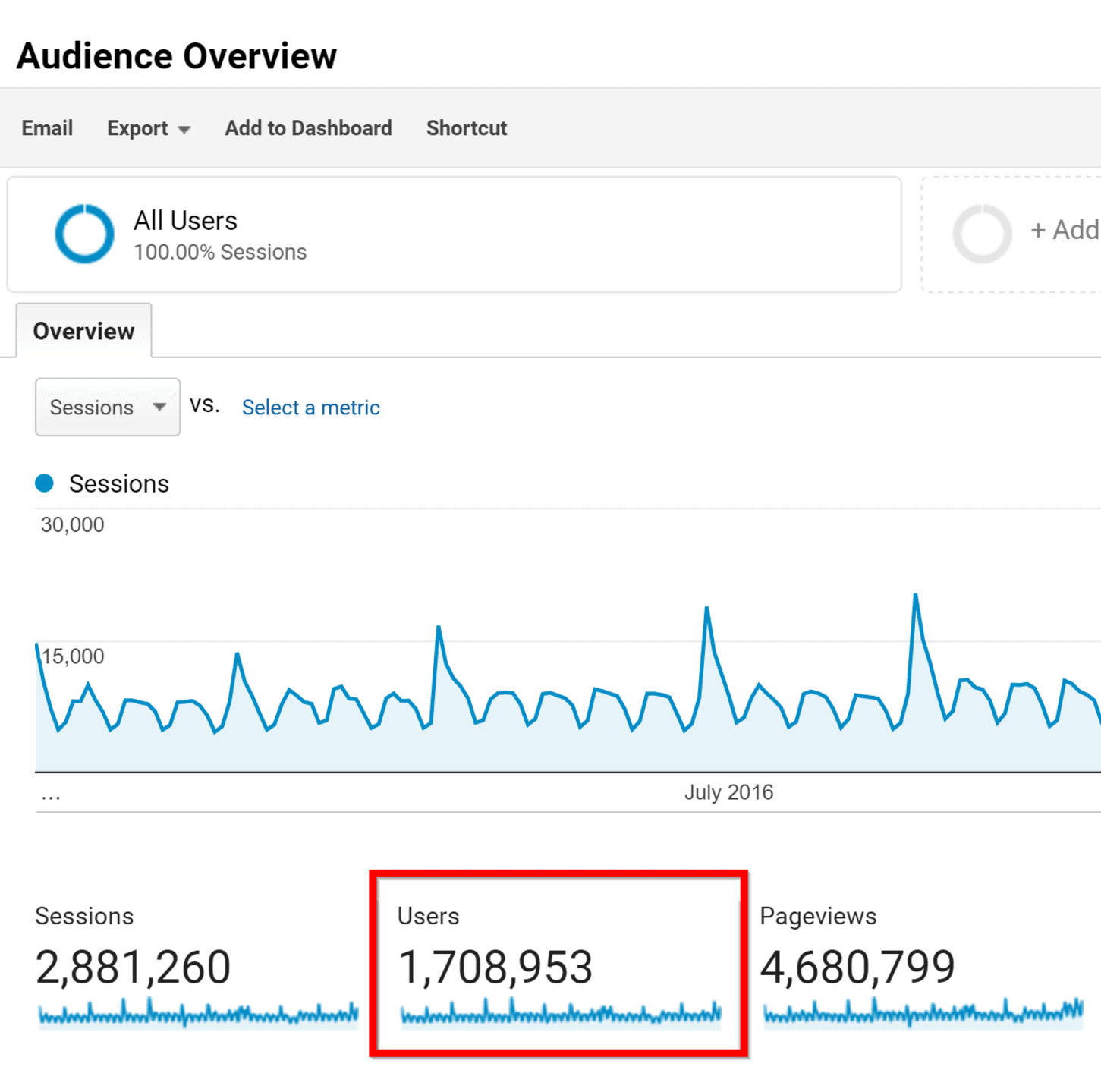 Now you might say to yourself, “But Brian…you’re different!” But I promise you I’m not.

In fact, I’ve had many of the same problems you may have right now, like:

#1: “I’m already doing well with SEO. Now I want to scale up. The thing is, I’m a one man show going with big brands. Can I really scale if I’m doing it all myself?”

#2: “I know how to write great content. But I need to get better at promoting it.”

#3: “I run an ecommerce site. Will white hat SEO really work for me?”

#4: “I have a client in a boring niche. Can I really create something people will actually share?”

If any of these sound familiar, you’re not alone.

While these problems are real, they CAN be fixed.

And today I want to help you overcome these common SEO hurdles.

Let’s start off with challenge #1:

#1: “I’m already doing well with SEO and I want to scale up. But I’m a one man show competing with big brands. Can I really scale if I’m doing it all myself?” 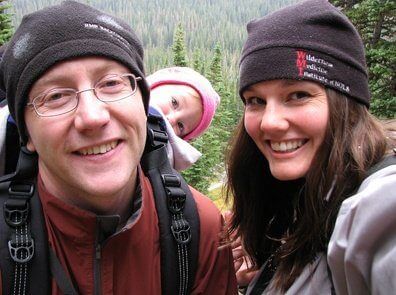 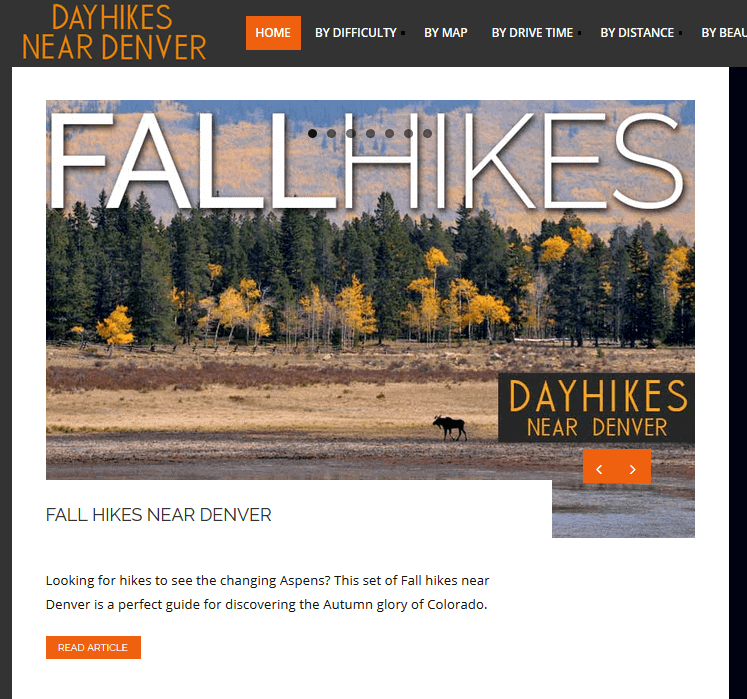 Even though Aaron’s site generated an impressive 630k visitors last year, he knew that he could do better.

That was the good news.

And Aaron would have to outrank these authority travel sites if he was going to scale his success.

And to do THAT, he couldn’t publish brief overviews of 879 different hiking trails.

Because that’s exactly what his competitors were doing.

For example, here’s the type of content Aaron’s competitors were putting out about one of the most popular hiking trails in Denver (called Hanging Lake): 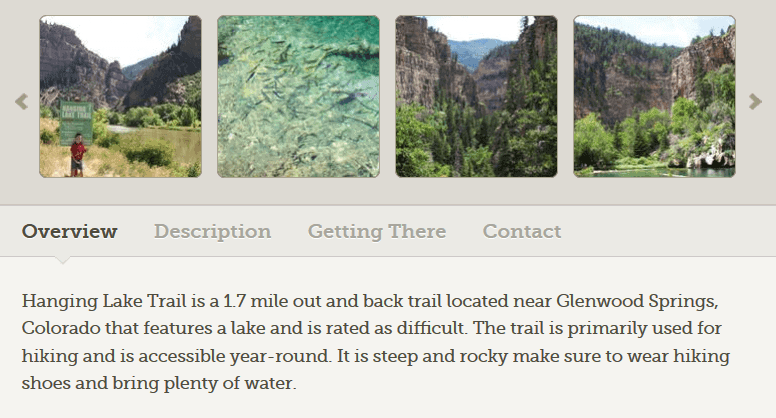 (This article is a superficial overview of the trail)

And here’s a boring black and white PDF from the USDA: 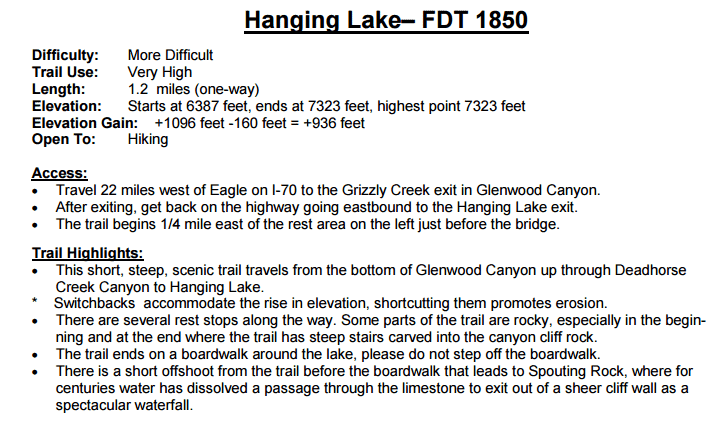 These big sites could get away with this mediocre content because they had massive authority and social media followings.

But Aaron didn’t have a huge following.

So he did the opposite.

Instead of 100 trail guides, he wrote ONE. And he made it amazing.

In fact, Aaron’s guide is so insanely thorough that it needs a table of contents: 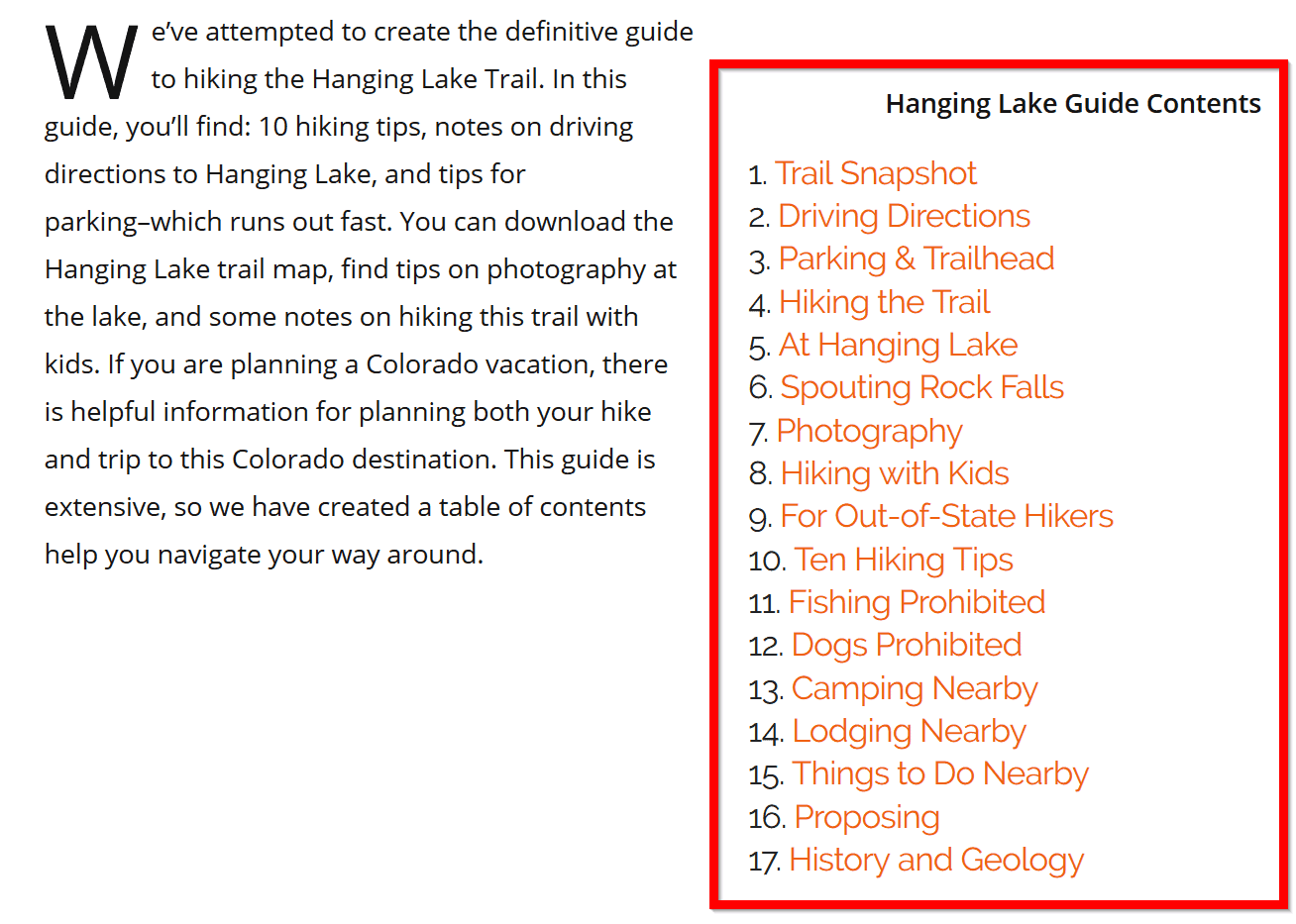 But his guide isn’t just 3000 words of fluff. Aaron packed his guide with meaty value.

For example, Aaron included directions to the trailhead… 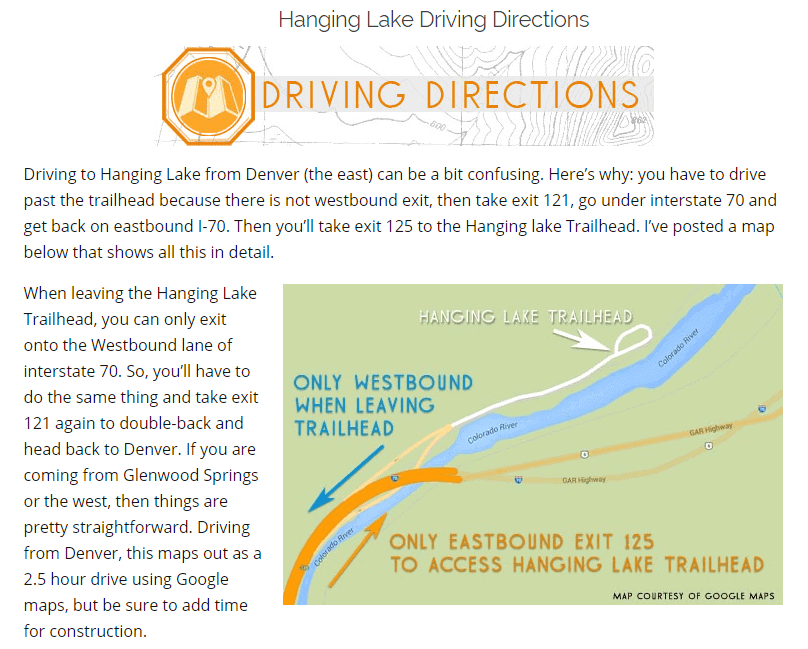 …and tips for taking photos of the trail: 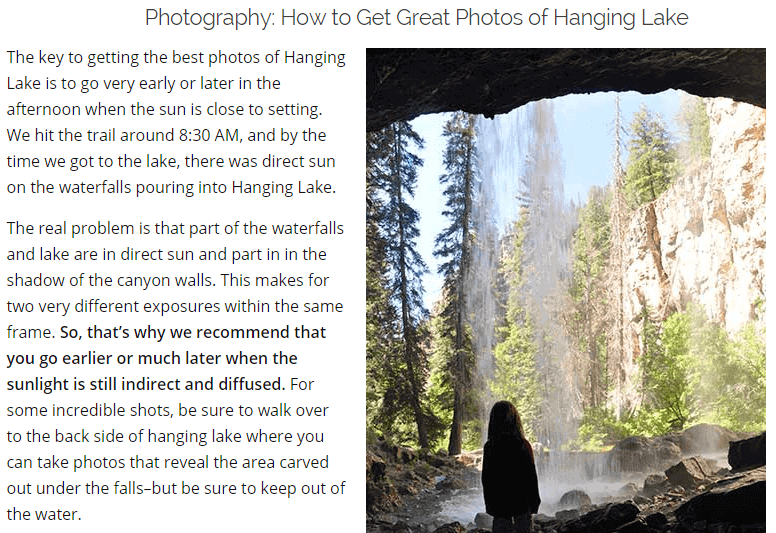 To go “the extra mile”, Aaron even took his family to Hanging Lake so he could personally record info and take pictures: 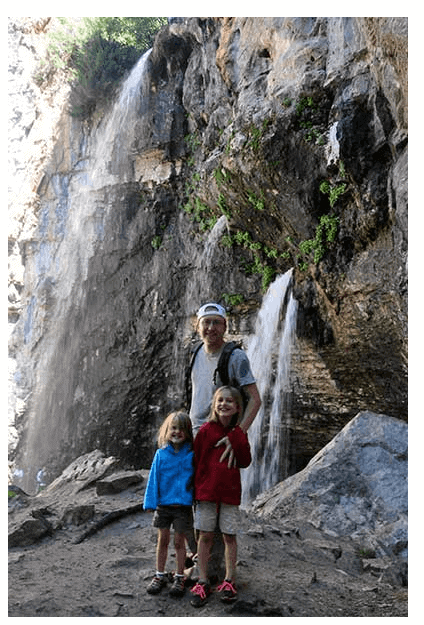 Because Aaron did the opposite of his entrenched competitors, he now ranks in the top 5 for several of his target keywords, including “hanging lake Colorado”: 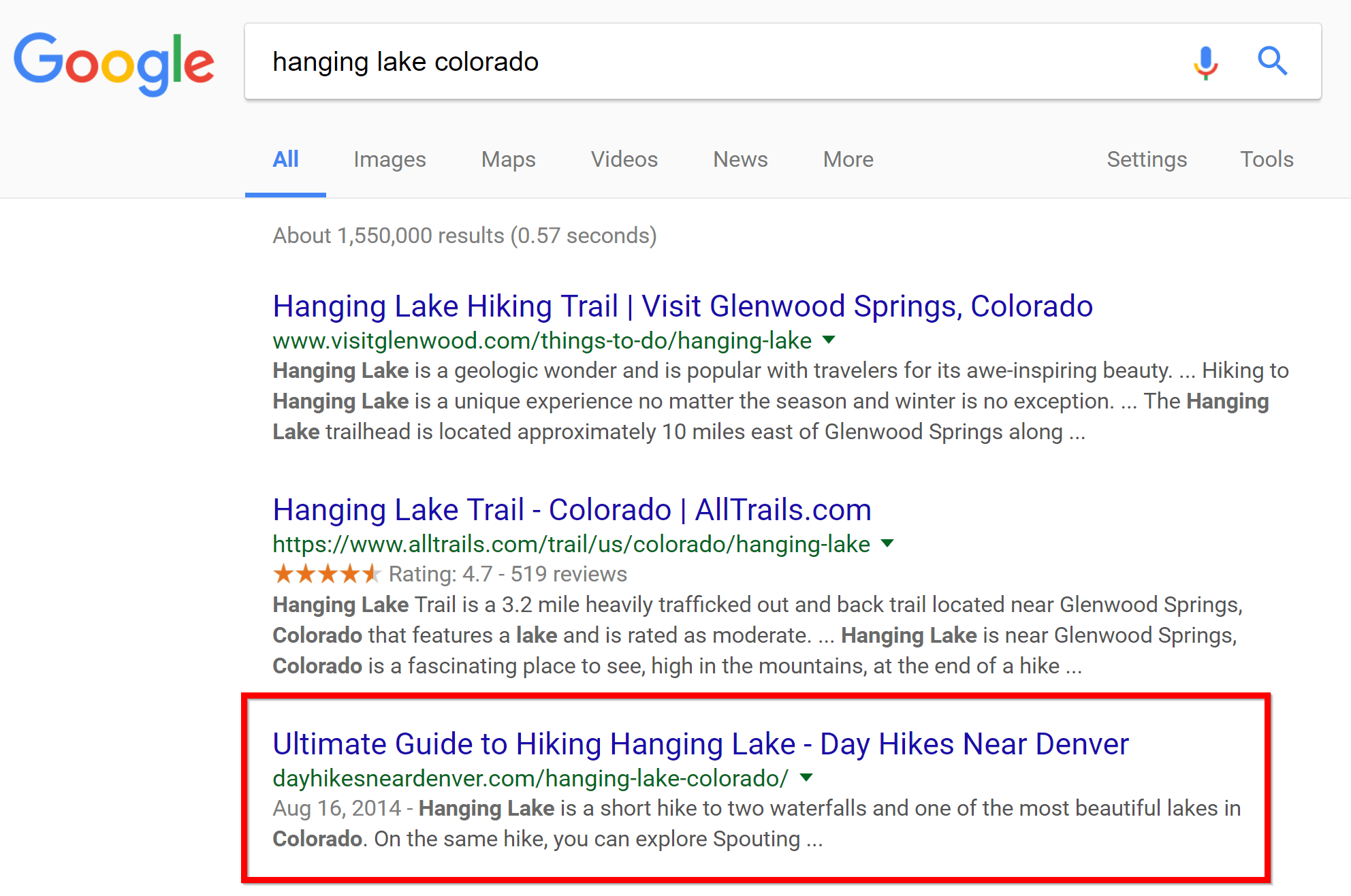 But for Aaron to get those rankings, he didn’t just “publish and pray”.

He actively promoted his new guide. Which leads us to common SEO roadblock #2…

#2: “I know how to write great content. But I need to get better at promoting it.”

But seriously, you do.

There are two things you want to keep in mind about content promotion:

1. Content promotion ONLY works if you have something worth promoting.

This is a big one.

I get at least 4 emails per day from people asking me to share mediocre stuff.

And I delete them all.

But the script doesn’t matter because their content isn’t something worth sharing with the Backlinko Community.

Let’s go back to Aaron for a second.

Once Aaron’s guide went live, it was time for him to promote it.

But Aaron didn’t HAVE a big audience.

So he did the opposite.

Here’s an example of an outreach email that Aaron sent out: 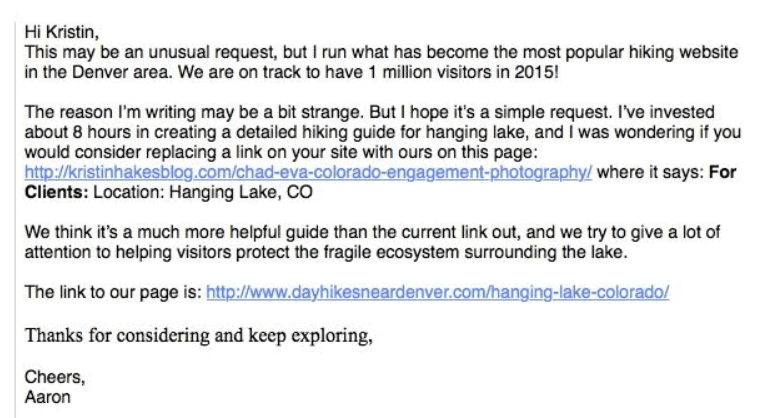 Because Aaron sent emails to people that wanted to read his guide, he received an overwhelmingly positive response:

And these outreach emails led to backlinks from serious authority sites, like Colorado.com (DA81): 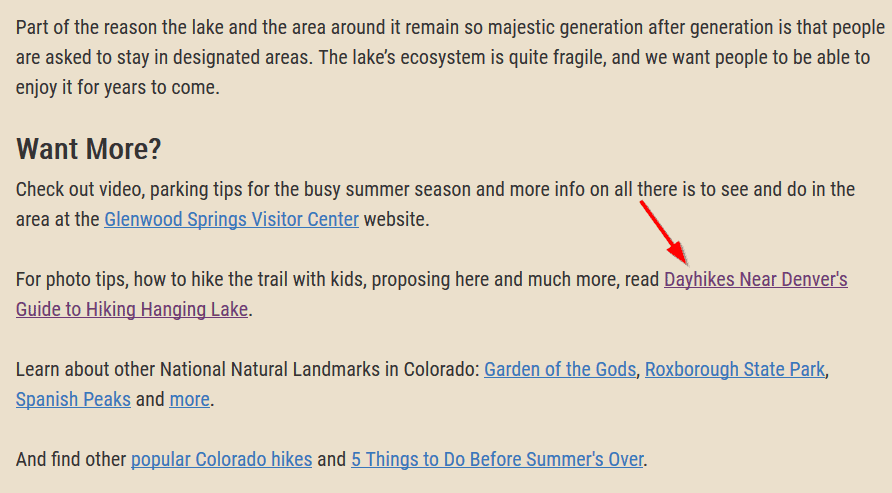 Not surprisingly, these high-quality white backlinks boosted Aaron’s traffic to his guide by 694%: 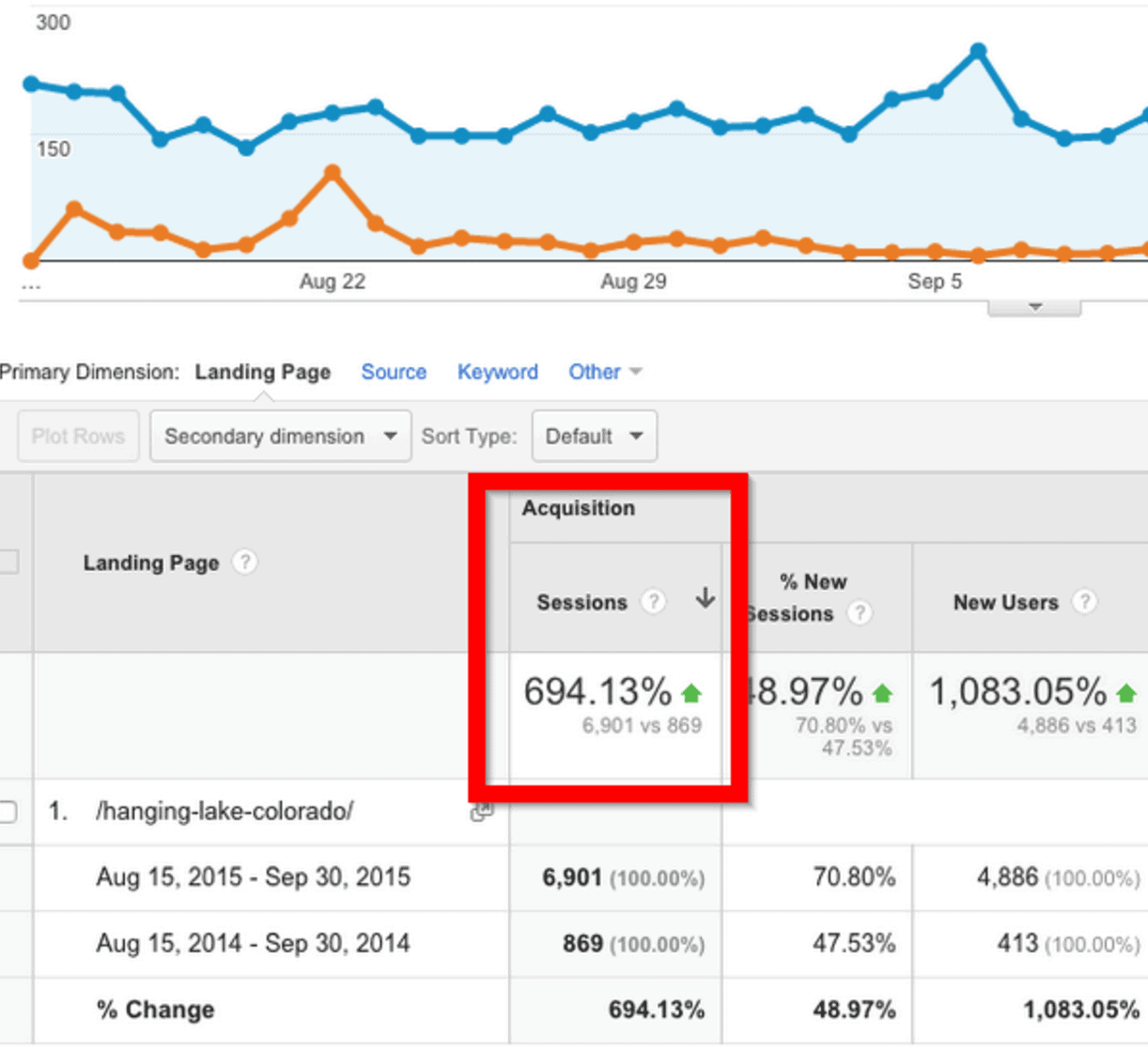 #3: “I run an ecommerce site. Will this white hat SEO stuff really work for me?”

“Brian, that might work for a blog. But I run an ecommerce site. How can I use this white hat SEO stuff?”

I totally understand where ecommerce site owners are coming from.

Your goal with SEO is to rank your product and category pages so you can sell more stuff.

Nothing wrong with that.

But here’s the deal:

If you think you can rank a site made up of 100% product and category pages, you’re in for a world of frustration.

Because the fact is, you need backlinks to rank.

And no authority site is going to link to a bunch of product or category pages.

But there’s an upshot:

You CAN use content marketing to boost your product and category page rankings.

And it’s not even that hard.

All you need to do is add a handful outstanding articles to your ecommerce site. 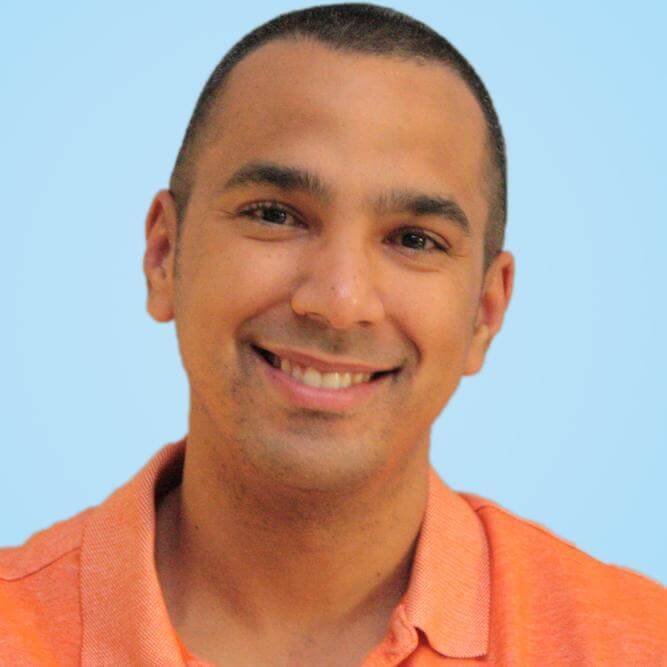 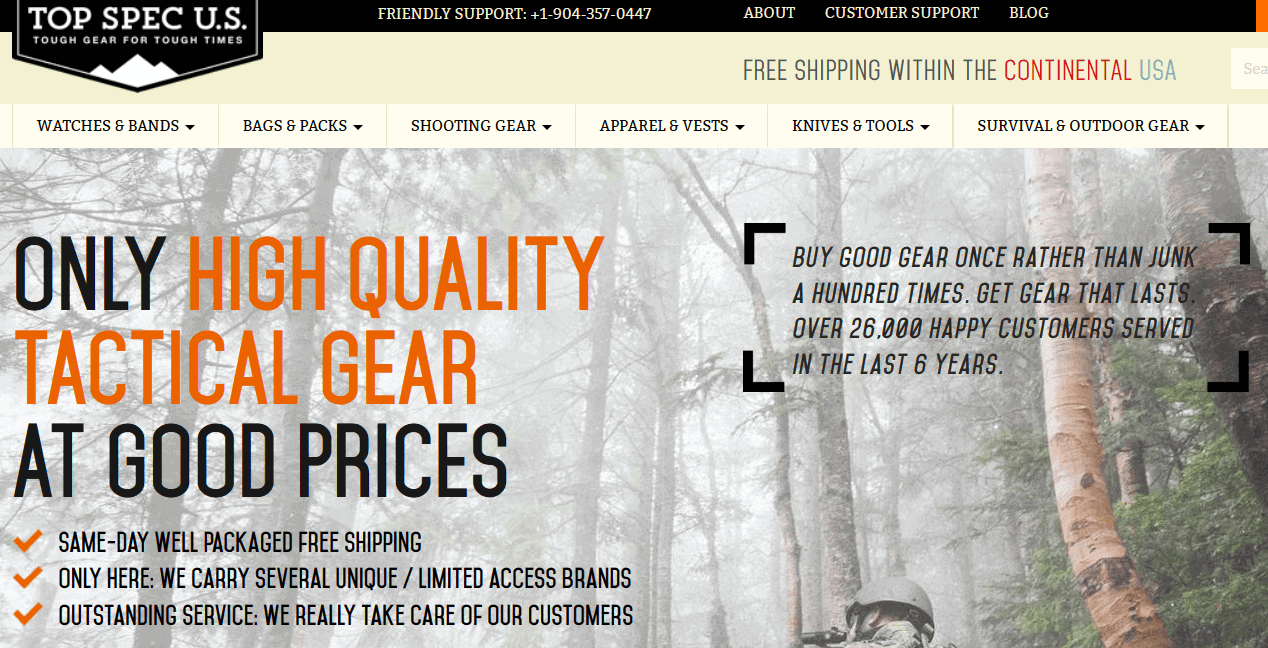 Like many ecommerce entrepreneurs, Darren was a new player in a super-competitive industry.

Most people in his position would create a bunch of product pages and hope for the best.

But Darren did the opposite.

Darren decided on day 1 that he was going to use white hat SEO to generate more targeted traffic (and sales). 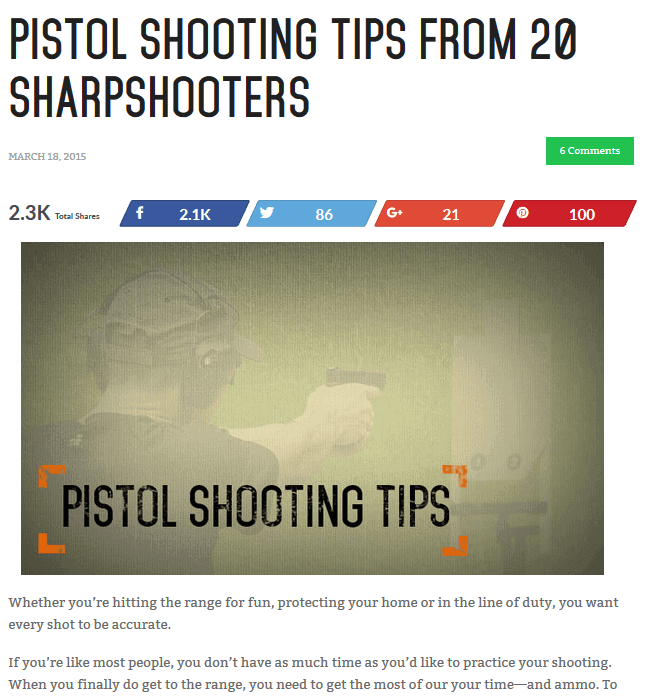 And because this post attracted quality backlinks, it boosted the rankings of one of his important category pages (heavy duty bags) by 259%: 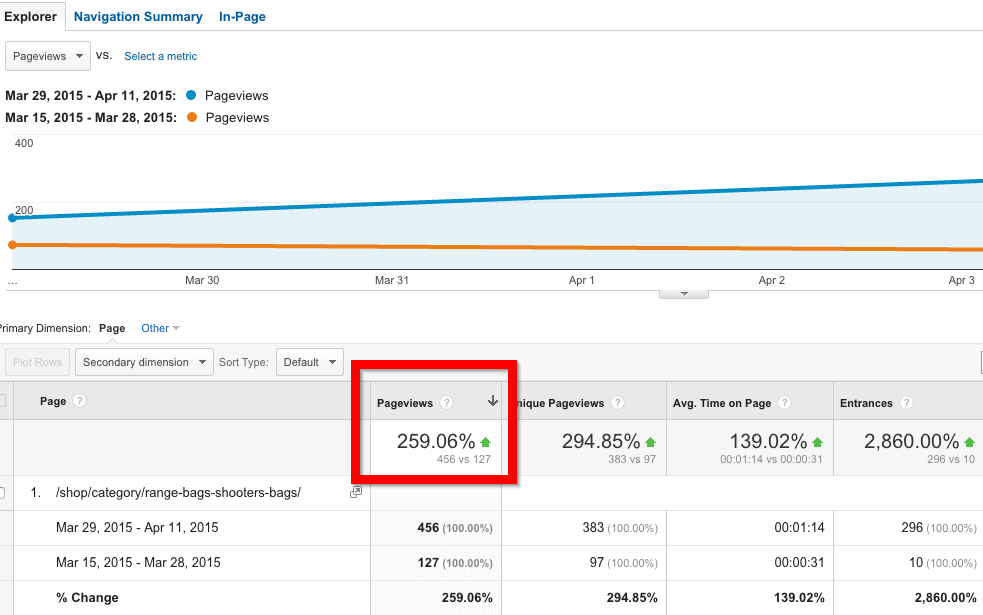 If you run an ecommerce site, you CAN (and should) use content marketing to get more traffic and sales.

In fact, because most of your competitors aren’t using it, content can be a big competitive advantage for you.

#4: “I have clients in boring niches. Can I really create something people will actually share?”

Have you ever said this to yourself?

“It’s really challenging to create content that’s shareable and linkable in my industry.”

If so, you’re far from alone.

Back when I ran my SEO agency, I ran into this problem all the time.

I’d have clients that were in industries that I never even knew existed.

It wasn’t easy, but over the years I learned that you CAN create content in any industry…

…even if that niche happens to be boring.

David is an SEO That Works graduate that heads up content marketing at iSEEIt, a mobile CRM tool. 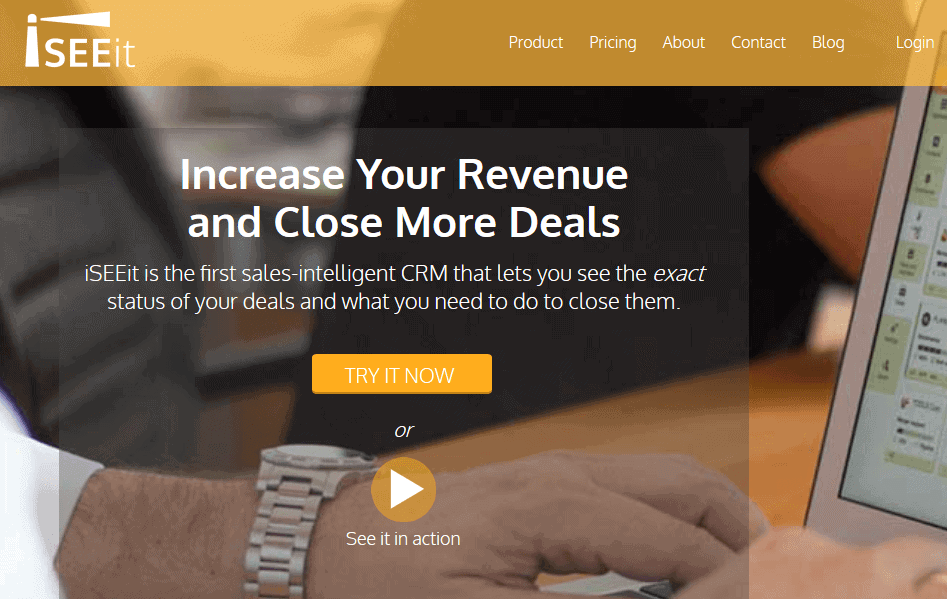 David is in a B2B space that has ZERO mass appeal.

Most people in David’s position would assume that white hat SEO simply won’t work in a B2B space like his.

And they’d focus on paid traffic.

But David did the opposite. 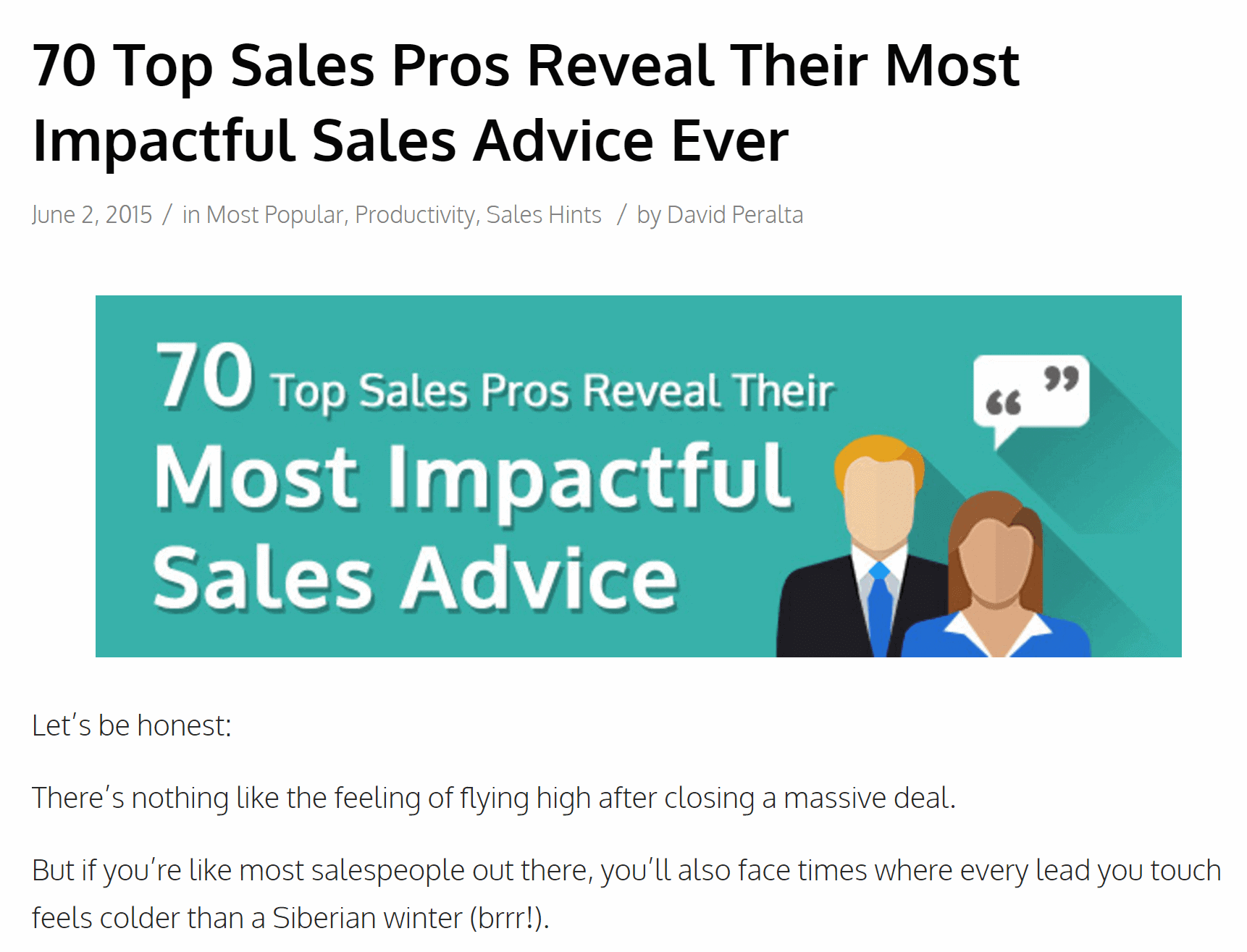 And it was a huge, huge hit.

Just look at the numbers from this single guide:

One of David’s 26 backlinks came from one of the most authoritative sales blogs online, Hubspot:

Because David’s content performed so well, it ranks for a keyword that his target customers search for everyday: “sales advice”. 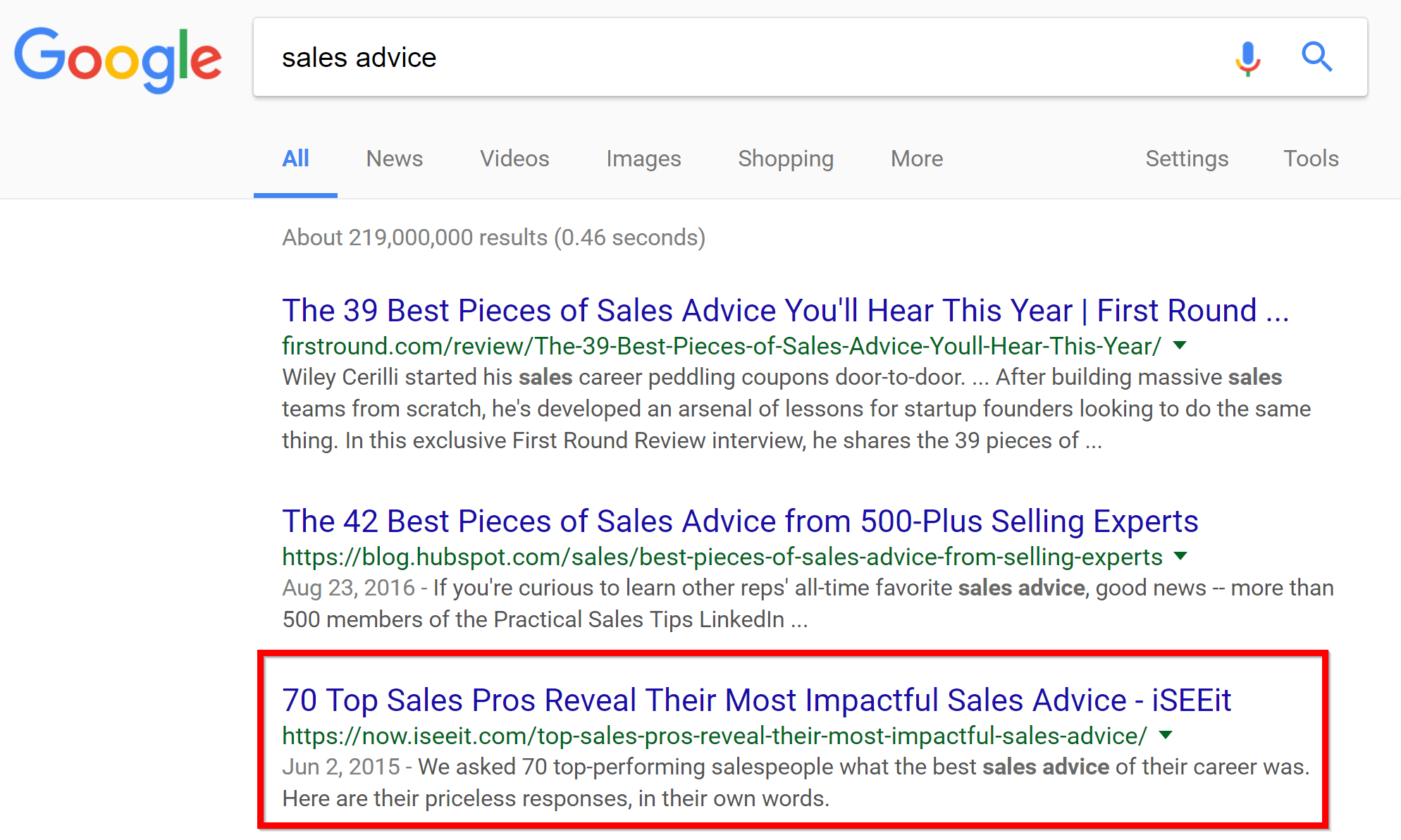 Here’s What To Do Right Now

You can see that, no matter what challenges you’re facing, you can totally do this!

(And I didn’t just tell you. I showed you real life examples of people just like you that are crushing it with SEO right now)

In the next installment of this series I’ll send you more details on how you can get more traffic with the “Do The Opposite” approach to SEO.

But right now it’s time to hear from you.

Leave a comment below to let me know which SEO struggle from this article you relate to most.

Or maybe you have trouble scaling up your current SEO success.

Either way, let me know by leaving a quick comment right now